Obama Faces Toughest Grilling About Drones, Not From The Media, But In A Google+ Hangout 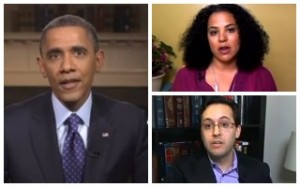 With more details about President Obama‘s drone program emerging, many have criticized what they perceive to be a double standard — in terms of transparency and accountability. Under George W. Bush, goes the argument, such a program would have faced more scrutiny. Obama did face some tougher questioning yesterday, but wasn’t from cable network or magazine: It came during a Google+ “fireside hangout.”

A little over a half hour into the interview, Kira Davis, a conservative video blogger and stay-at-home mother, questioned the president, critically but respectfully, on his promises of transparency, particularly in light of recent issues like drone strikes and Benghazi.

“You ran on a platform of really trying to become one of the most transparent administrations in American history. However, with recent leaked guidelines regarding drone strikes on American citizens and Benghazi and closed door hearings on the budget and deficit, it just feels a lot less transparent than I think we all hoped it would be,” Davis remarked, asking: “How has the reality of the presidency changed that promise? And what can we do moving forward to kind of get back to that promise?”

Obama replied that the administration is indeed the “most transparent” in history — be it in terms of White House visitors or information about legislation. Benghazi, however, “is not a good example” because it “was largely driven by campaign stuff.” Congress is “sort of running out of things to ask,” he added.

But there are valid concerns, Obama said: “When it comes to things like how we conduct counterterrorism, there are legitimate questions there, and we should have that debate.”

Following up on Davis’ question, Lee Doren honed in on the issues of drones specifically, citing the concern over the legality of drone strikes against American citizens and “that is specifically allowed versus citizens within the United States.”

“And if that is not true,” Doren asked, “what will you do to create a legal framework to make American citizens within the United States believe know that drone strikes cannot be used against American citizens?”

There “has never been a drone used on an American citizen on American soil,” Obama responded, noting “safeguards” surrounding counterterrorism operations. Rules will vary domestically and abroad, he added.

Interestingly, Obama went on to concede that what’s “absolutely true is that it is not sufficient for citizens to just take my word for it that we are doing the right thing.”

I am the head of the executive branch. And what we’ve done so far is to try to work with Congress on oversight issues. […] And that is something that I take very seriously. I am not someone who believes that the president has the authority to do whatever he wants, or whatever she wants, whenever they want, just under the guise of counterterrorism. There have to be legal checks and balances on it.

While the policy has garnered support, a good deal of the criticism has stemmed from its constitutionality — and the double standard of those who criticized President Bush’s tactics while refraining from condemning Obama’s strikes on American citizens. The questions from the hangout make for the most direct questioning he’s faced about it yet.