Obama Has 3 Ways To Win Florida, And They All Look Good

Obama Has 3 Ways To Win Florida, And They All Look Good 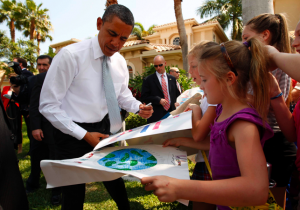 In a tough election race there are uphill battles, then there are avalanches. Mitt Romney faces the latter in his quest to win should he lose the swing state of Florida. Ethnically diverse and fast-growing, Florida packs 29 electoral votes, the fourth-highest in the nation (tied with New York).

It’s long been said that “as the I-4 corridor goes, so goes Florida.” That’s as true today as it was years ago. The 132-mile Interstate 4 stretches from Tampa to Daytona Beach and touches 40 percent of the state’s registered voters, roughly four out of five who are Democrats or Republicans. “I always think of Central Florida — the I-4 corridor — as the tipping point of the state,” said Aubrey Jewitt, a political science professor at the University of Central Florida.

Here’s what Mr. Romney is up against should he lose Florida. Let’s say he wins North Carolina, Virginia, and Colorado (although he’s tied in the latter two) — Romney could choose a couple of paths to victory, none of which is enviable: win Wisconsin, Iowa, and Minnesota. All states he is currently trailing in and if he won would only provide 26 electoral votes instead of Florida’s 29, or win Pennsylvania, Ohio, and Michigan. Again, another trio of states Mr. Romney is trailing in.

Not only can Obama effectively end this race with a Florida win, but he has three ways in which to do it.

Among Latinos, who make up 13 percent of the state’s electorate, Romney is polling lower than McCain was at this point in the 2008 race. McCain received 31 percent of the Latino vote in the election, and Romney is currently at 23 percent. Romney’s team has said the “magical number” is 38 percent — and they’re right, it is magic because they’ll never see it. They don’t have a strategy that will nearly double their Latino support from where they are now. They’d be lucky to cross 30 percent. Of course Romney could always call Daddy Yankee, the reggaeton star, but, again, that endorsement didn’t go so well for McCain. And Romney’s hard-line support for immigration deportation and his distaste for the DREAM Act — which would have provided a legal pathway for undocumented immigrants, isn’t likely to increase support any time soon.

Conventional wisdom says that Cubans, who lean more conservative than other Latinos, can tip Hispanic support particularly in Miami-Dade, a key county. But that couldn’t bail out McCain any better than an out-of-work bail bondsman. The math just doesn’t compute. McCain took 63.9 percent of Cuban vote, but still lost Miami-Dade by 16 points, and the state overall by 15 points.

As a swing state that aligns itself more with current issues than traditional political archetypes, Florida’s electorate includes a large number of self-identified independents. In 2008 29% of voters considered themselves independent and President Obama won this group 52-45. Thus far, President Obama is polling one point ahead with 8 percent either undecided or having no opinion. So this vote is up for grabs.

Independents are focused primarily on economic issues — from housing to the unemployment rate — that continue to hold the state back from recovery. But they’re also concerned about taxes, the war on terror, and the deficit. President Obama’s challenge is to convince them that maintaining the Bush tax cuts for middle class families with income up to $250,000 while increasing rates to Clinton-era levels for those above $250,000, is the best way to lessen pressure on the deficit while also decreasing the burden on the average family. The Bush tax cuts were the largest driver of the deficit. The President doesn’t have to make this case alone — George W. Bush’s own Congressional Budget Office (CBO) said as much in 2005. The CBO found that, since 2001, $539 billion was added to the deficit and tax cuts accounted for 48 percent of it. So why trust that these same tactics will work if enacted in Paul Ryan’s budget?

Florida is as known for its elderly as its oranges. Nearly two-thirds of the electorate is age 45-64, and 22 percent are age 65 and above. President Obama is in the envious position of not having to win the elderly vote, but more so focus on keeping the gap tight enough so Romney isn’t able to counter Obama’s edge in youth voters.

Rewind back to 2008 exit polls where there was an (estimated) advantage to President Obama 52-47 among the age 45-64 age group, and a loss of 53-45 among the 65 and older group. So how does 2012 compare? In some respects much more favorably for President Obama.

A CNN poll conducted the last week of August shows a one point lead in the age 50-64 group, and trailing by two points in the age 65 and older group. If that’s not bad enough, it gets much worse for Mr. Romney. Democrats have yet to finalize their message driving home how destructive Vice President Paul Ryan’s budget plan is to Medicare and Medicaid.

The Medicare angle, honestly, is more Democratic sleight of hand than anything else. Ryan’s budget cuts Medicare just as Obama’s budget would. The only difference, as Ezra Klein has pointed out, is how the cuts — or ‘savings,’ depending on who’s selling which plan — would be spent. Ryan’s budget focuses on spending less money, period, bringing down spending as a percentage of gross domestic product (GDP) to the lowest level in nearly 30 years. Obama’s budget uses Medicare savings to pay for Medicaid expansion in the Affordable Care Act.

But here’s the thing that’s lost in all of this: the elderly need Medicaid too. While the focus typically is only on Medicare because it is the primary health insurance program for the aged, Medicaid covers long-term care, acute care, and inpatient hospital care. In other words, if your grandmother needed to recuperate from an injury or illness in a hospital, she would be using Medicaid to do so, not Medicare. Many of Florida’s elderly are dual eligibles, those able to receive care under both Medicare and Medicaid. In fact, nearly 644,000 elderly in Florida are dual eligibles. A number so large that if this group were their own county, they would be 25% bigger than Miami-Dade — Florida’s most populous county. Ryan’s budget cuts would end services for thousands, denying care for the people who would need it the most yet can afford it the least. Once Democrats hammer that home, there’s no way Romney won’t leave Florida without a headache.