Just How Truly ‘Pro-Choice’ Is The Democratic Party?
video

Just How Truly ‘Pro-Choice’ Is The Democratic Party? 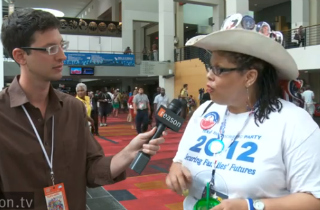 When it comes to abortion rights, the Democratic Party is clearly the party of “choice.”

But are they “pro-choice” when it comes to other personal decisions people make in life? Reason TV, the video arm of libertarian Reason magazine, traveled to the Democratic National Convention to find out.

All of the delegates producer Zach Weissmueller interviewed affirmed their belief in a woman’s right to choose to get an abortion. “A woman has a right to choose what to do with her body,” one delegate neatly summed it up.

But what about a woman’s right to choose whether to put large sodas or foods with trans fats into her body? Not quite.

“I think a lot people make harmful decisions,” one woman said in justifying what she called government’s cigarette, alcohol, and fatty food “interventions.”

When asked about Senator Chuck Schumer‘s successful crusade to ban the alcoholic energy drink Four Loko, delegates had similarly nanny-statist responses: “Is it really a choice? You’re deciding to do something that’s not healthy for you,” one woman said.

“But if you decide to do something that’s not healthy for you,” she explained, “let’s talk about the results of that action that you take.”

“So people should only be allowed to make good choices?” Weissmueller asked.

“No, people should make the choices that have good results,” she concluded.

Yikes. Not even going to dissect just how utterly paternalistic that is. But does she realize that exact logic is often applied by Republicans in banning the very things she likely supports?

Republicans would claim that, hey, abortion kills a potential life — i.e., a “bad” result in their mind. Or they could also whip up some (totally false) figures about gay parents leading to worse-off children as justification for continuing to prevent same-sex marriage. When you base policy on encouraging only “good” choices, you stray into incredibly subjective territory. And also, yeah, there’s that whole thing about letting people make their own decisions and fail on occasion.

Weissmueller continued on to trip up a few delegates by asking them whether they support someone’s right to choose to join a union:

“It should be a choice to join a union,” one delegate said.

“So you’re in favor of ‘right to work’ states?” Weissmueller asked.

The delegate scrambled for a response, scratching her head, saying: “No, I — well, it’s a choice not to be in a union, but I think unions do good. So I would choose — I guess not. I guess I’m not in favor of ‘right to work.'”

The delegates also made clear their opposition to “choice” in where parents send their kids to grade school and what sort of lightbulbs people may buy.

To be clear: by no means are the Republicans the “party of choice” either. Aside from the obvious abortion restrictions, this is also the party that doesn’t want you to choose who you marry (if you’re gay), what drugs you put in your body, whether you can spend your money on online gambling, etc.

Watch below, via Reason TV: