Obama Holds Impromptu Briefing: He, Sgt. Crowley and Gates May Have a Beer Together
VIDEO

Obama Holds Impromptu Briefing: He, Sgt. Crowley and Gates May Have a Beer Together 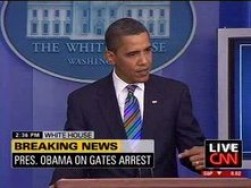 Wow. So Obama just made a surprise appearance at the daily White House briefing and addressed the controversy that has arisen from his remarks during Wednesday’s presser regarding the Henry Louis Gates arrest last week, when he’d described the Cambridge police as “acting stupidly.”

Obama told the room he’d just spoken to Sgt. Crowley on the phone and that his earlier impression of Crowley being “an outstanding police officer and good man…was confirmed in the phone conversation, and I told him that.”

Obama said he understood that his words had contributed to the situation being ratcheted up: “I could have calibrated those words differently and I told this to Sgt. Crowley.” Obama also said that he still believes, based on his knowledge of the situation, that both parties overreacted.

Obama also mentioned that he and Crowley finished the call with some talk about Crowley, Gates, and himself having beer in the White House, something Gibbs later said had been a suggestion of the sergeant. According to the President, Crowley asked if he could do something about getting the press off his lawn, to which Obama replied: “I can’t get the press off my lawn.”

As for an apology, this is about as close as Obama appeared to get to one:

The fact that this has garnered so much attention I think is a testimony to the fact that these are issues that are still very sensitive here in America. And to the extent that my choice of words didn’t illuminate, but rather contributed to more media frenzy, I think that is unfortunate.

He also addressed those critics who felt that as President he shouldn’t have become involved in this issue because it was a local issue.

That part of it I disagree with. The fact this has become such a big issue I think is indicative of the fact that race is still a troubling aspect of our society. Whether I were black or white, I think that me commenting on this, and hopefully contributing to constructive as opposed to negative understandings about the issue, is part of my portfolio.