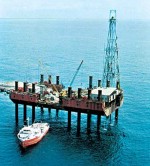 Earlier this week, President Barack Obama announced he would open up new areas off the Atlantic coast, Alaska, and Gulf of Mexico to drilling for fossil fuel. Most media coverage of this news was so predictable that as the Huffington Post’s Jason Linkins pointed out, it was almost impossible to differentiate between any of the various cable news shows covering the issue.

HuffPo also compiled a video for Linkins’ piece that boils down to little more than 10 minutes of slogans (hint: this, baby, this). Of course, the endless repetition of this catchphrase called to mind the 2008 presidential campaign, so already this drill bit (well played, us!) didn’t feel entirely new. Oh well: for a more current take, let’s look at this CNN article featuring an Obama defense of his offshore drilling views.

…Oh. Wait. That article was written a year and a half ago. Talking Points Memo today described Obama’s new plan as a “flip flop”…but also noted in the same article that he really first “flip-flopped” to potential offshore drilling support during his presidential campaign. So not only are the oft-repeated drilling talking points old, but essentially the entire issue is old. (It’s worth noting that the TPM piece also tackled the more substantive issues Linkins felt most media coverage of offshore drilling lacked, namely: was Obama right then, or now?)

Yes, what really irritated Linkins was preoccupation with things like:

Who will win the political debate? Will this help or hurt Democrats? Will this earn them Republican support, on anything?

Proving that it wasn’t only cable news networks that focused on such questions, the New York Times ran a story today (originally from Greenwire) addressing just such issues. The verdict on bipartisan support:

Obama has not moved many GOP votes, if any.

Hmm. Sound like any other recent domestic policy initiatives you can think of? That’s right – even the apparent political fallout from Obama’s plan is played out. Linkins should look on the bright side: if the unimportant aspects of the offshore drilling story keep being so old-hat, soon enough no one will want to pay attention to them anymore.