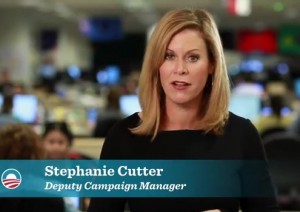 In an email to supporters, Barack Obama‘s reelection campaign is pushing back against a huge ad buy by Koch-funded Americans for Prosperity with a video response from Deputy Campaign Manager Stephanie Cutter that adopts the informal presidential-campaign-next-door ethos that has become its hallmark. In the video, Cutter blasts the distortions and lies in the pro-Romney SuperPAC’s ad, and promises to “call their BS when we see it,” which is probably the first time I’ve heard those initials used in an official campaign communication.

The memo and video are a very clever stylistic extension of the Obama campaign’s conversational modus operandi, which mixes high-tech outreach with a well-constructed illusion of familiarity best exemplified by its now-famous email subject lines. This particular example conveys that informal immediacy with the subject line “Truth Team: This one couldn’t wait,” and the accompanying video feels like the hastily-done vlog it’s meant to be, but manages a stealthy slickness that escapes the casual viewer:

The ad-libbed feel of the video (I love the “Use Tumblr, whatever that is” line) is so effective, you don’t really notice the perfect lighting, slick graphics, and stock footage that embellish it. From a messaging standpoint, that “call their BS” line is a loud and clear “no more Mr. Nice Guy.”

On the substance, ThinkProgress has a good roundup of the fact-checks that were done on the AFP ad, which relied on Six Degrees of Kevin Bacon-style logic to make it seem as if the President’s green jobs initiatives have mainly benefited workers in other countries. Sample distortion: A solar company is using federal funding to build a solar power plant in California. That company is also building a manufacturing plant in Mexico without federal funds. The ad says “$1.2 billion to a solar company building a plant in Mexico.”

Now, you’d have to be Pollyanna’s naive half-sister to be shocked, shocked!!1! that a political ad contains distortions and lies, but what is somewhat shocking is that Cutter rushed off to do this video because the ad just got a $6 million ad buy in swing states. If that’s a difficult number to judge in this age of jillionaire campaign finance, keep in mind that Priorities USA Action, the pro-Obama SuperPAC headed by former White House spokesman Bill Burton, raised just over $4.5 million in the entire first quarter of 2012. Their total cash on hand at the end of March was just over $5 million. Americans For Prosperity spent more than that on a single ad buy. Let that sink in.

President Obama took heavy criticism for encouraging donors to give to Priorities, but when you look at what he’s up against, it’s hard to argue with the necessity. When you look at the money the Koch brothers are spending, you have to ask whether they’ll get what they paid for.