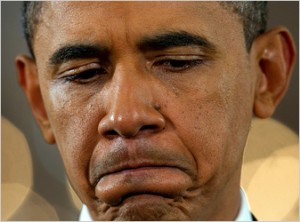 It seems that an excess of time zone-shifting may have addled President Obama’s brain after his latest trip to Lisbon. On Twitter, reporters Mark Knoller of CBS and Ed Henry of CNN both wrote that as Air Force One was flying back to Washington on Friday, Obama stopped by the press cabin and joked about having the plane stop in South America so that he could pay a visit to Hugo Chavez.

Here are the tweets in question: 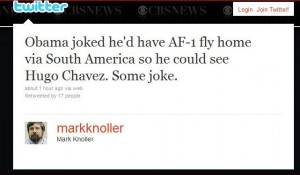 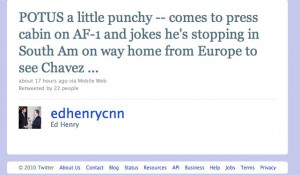 Obama obviously wasn’t being serious when he made his remark. Even so, it seems that some are taking the comment to mean that Obama really is in the tank with Chavez—or at least that he’s not as serious about Chavez as he should be. The Blaze’s post about the joke has already garnered 285 comments in just over 24 hours, comments like these:

Mr Obama will try to take America down with him and turn us into a Soros communist puppet. I for one will not let her pass into the night without giving my all to keep her free.

Why would the President of the Free World meet with a dictator of the likes of the Apocalyptic dictator such as Ahmadhinejad? What is brewing behind the scenes that compels him to make such a detour? What are they up to?

Who thinks he wasn’t kidding? Sounds like he just wanted to so see his friend and dictator … for some pointers on fixing the next election (if he “allows” it at all) or taking over another private enterprise. WAKE UP America!

So remember, elected officials of America: If you make a joke about a sensitive subject, people are going to take you seriously. Maybe it’s best to save up all your zingers for the Alfred E. Smith Dinner—or just to make sure only to poke fun at your own colleagues.