Occupy DC Protester: Shouting Fox News Down ‘Does Not Help Our Image’
video

Occupy DC Protester: Shouting Fox News Down ‘Does Not Help Our Image’ 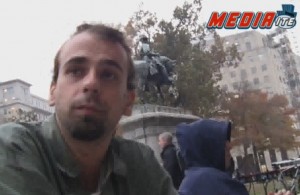 During my visit to Washington, DC’s Occupy encampment in McPherson Square yesterday, I had the chance to interview Bryan Meister, a former Democratic campaign worker who is something of an unofficial spokesman for the Occupy DC camp, and I asked him about the incidences of Occupy protesters shouting down Fox News reporters. He defended the autonomy of individual protesters, but when pressed, allowed that “It does not help our image.”

“I would certainly discuss, with somebody, the effectiveness of that tactic if I saw it being engaged in,” he continued.

The reasoning behind such incidents, according to Meister, is that Fox News hasn’t given the Occupy Movement a fair shake, and any interviews they participate in would likely be cut to make them look bad, or to omit key bits of context. The question, though, is whether avoiding that risk is worth the negative impression left by protesters simply shouting down members of the press, an activity that runs counter to the spirit of the First Amendment.

Bryan also talked, briefly, about some of the celebrities who have lent their voices and faces to the Occupy Movement. “Celebrities who wanted to beef up their underground cred by comin’ out here and making a big scene out of it, I think a lot of us feel that was pretty silly,” he said.

Here’s a clip of that portion of our interview, plus some bonus footage of “Occupy Humor,” a brief, nominally successful exercise in Occupy joke-telling.