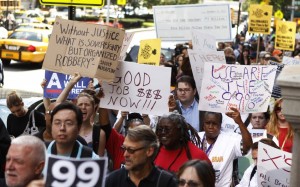 Occupy Wall Street may or may not be the liberal version of the Tea Party, either way we’ll probably know within the next year. But that’s far too late for the GOP to ignore them, or worse act as though they’ll only have 15 minutes of fame. Here’s a clue, GOP: If you’re still looking at your watch waiting for it to end, use that time wisely and get a strategy.

It’s been two weeks and the protests have gone viral and are now occurring not just in New York City but also in cities in more than 78 countries. The message is as clear as the implications: income inequality has gotten out of control and is untenable. It’s a progressive rallying cry that has tapped into something the Obama administration hasn’t been able to do since early 2009; namely, leverage the sense that people powered by little more than anger and a desire to change government can actually do it.

GOP Needs to Change Message
After all, what does the GOP have to lose by showing empathy for protesters, acknowledging income inequality (which is categorical, not fanciful), and lending their voice to implementing structural change? Most recently, House Majority Leader Eric Cantor (R-Va) did mention income inequality (for once) on Fox News, claiming that “Republicans are about income mobility, and that’s what we should be focused on to take care of the income disparities.”

Sure, Republicans can make a case for that. Will it be convincing? Probably not. Tax cuts can drop down like manna from heaven but that won’t nourish those who lack critical job skills and higher education. For instance, that message probably isn’t endearing to rural white voters who make less than $40,000 a year. How could it be? That voter barely pays federal taxes as is and is far more concerned about whether or not they’ll have their job the rest of the year much less in five, the economy, Social Security, and Medicare. The Occupy Wall Street message can and will resonate with this voter if the GOP isn’t careful. It is primarily this kind of voter who makes up the majority — roughly two-thirds — of the coveted swing voters group.

So far, the Occupy Wall Street crowds have been dismissed as hipsters gone crazy, violent protesters with little else to do, and general scofflaws. With crowds collectively reaching past the hundreds of thousands mark, clearly those generalizations are inaccurate and are made with the intent to squelch the movement. But even the Tea Party is taking notice. A local Tea Party leader in Indiana told CBS News that she “sees some similarities between how the tea party movement and the Wall Street protests began” and that in the end the critical step is “taking the emotion and focusing it toward changing government.”

Obama is Learning from Occupy Wall Street
And this is where the Obama administration went wrong. Instead of expounding on voter distrust of financial institutions and firms requiring bailouts and the system being rigged in favor of the haves over the have-nots, the Obama administration acted as though not doing bailouts would have affected all of us equally and that when things got better we would all be better as a result. But are we? Bank of America is a prime example. Fresh off a $5 billion investment from Warren Buffett who expressed confidence in their operations, they have created a $5 monthly debit card fee. This after receiving billions in government bailouts and purchasing Countrywide, a company rife with mortgage fraud that was on its way to implosion as it left victims in its enormous wake. By doing this the administration became an enabler of the problem instead of a fierce supporter of the American people and their interests. Occupy Wall Street intends to rectify that. They make no excuses for corporations’ suspect behavior, for corporate executives’ inflated salaries, or for “political realities” not conducive to the change they seek. Instead they protest, they sit-in, they get arrested. They don’t do much talking because they don’t believe words propel politicians to action; they believe only action compels politicians to act.

GOP Can’t Afford for Democrats to Get the Message
Fact is, Pres. Obama already rode the populist wave to victory once. Cue the 2008 reel where he campaigned on, among other things, delivering universal healthcare and ending the Iraq war, two uniquely populist positions. With the former he lambasted in the general election John McCain’s position that relied on the private market to fix the healthcare mess. And with the latter, he excoriated Hillary Clinton, his rival in the primaries, for supporting the Iraq war in the first place. Pres. Obama is no stranger to endearing himself to the populist animations of a voting public keen on redeeming the American dream they have worked hard for. Occupy Wall Street presents a golden opportunity to do just that. “[Martin Luther King, Jr] would want us to challenge the excesses of Wall Street without demonizing those who work there,” said Pres. Obama regarding Occupy Wall Street at the MLK dedication ceremony. Republicans would be remiss to believe different.

John Wilson is a health policy analyst in Maryland, and also a staffwriter for The Loop 21. He frequently writes about health policy, education policy, and politics. You may reach him at john@policydiary.com.