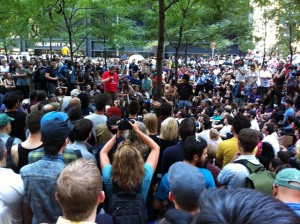 In a sea of people taking video with hand-held HD cams and accessing the web with their smartphones, the Occupy Wall Street movement has managed a surprisingly old-school, almost primal, atmosphere. Alongside the drumbeats, public urination, and fugitives from justice, the protesters–who, by law, cannot use any microphones, speakers, or bullhorns–have been forced to amplify the words of guest speakers by loudly repeating whatever they say. On Sunday, Slovenian philosopher Slavoj Zizek spoke to the masses, and the human microphone was in full effect:

It’s an instant joke-killer, as the monotone human microphone has some trouble with cadence and timing. Zizek’s story about the red ink, for instance, elicited some chuckles that seemed to be more out of respect than anything (the laughs came after the human microphone repeated the punchline, not when Zizek–clearly within earshot of the front line of video-takers and repeaters–first uttered the line). And Zizek hasn’t been the only one having to deal with the microphone’s quirks. Michael Moore dropped a couple quick jokes in his rallying cry, and they were wholly lost in translation:

Also, the human microphone seems to malfunction just a little bit when the speakers doing a mic check ask participants to repeat the “no drugs or alcohol” mantra:

NPR’s Richard Kim nailed the nuances of the human microphone, saying that it’s agonizingly slow, but still a pretty important part of the movement. It still has its kinks, however, including a speaker’s inability to make deep points.

The overall effect can be hypnotic, comic or exhilarating—often all at once…. The human mic is not so good for getting across complex points about, say, how the Federal Reserve’s practice of quantitative easing is inadequate to address the current shortage of global aggregate demand, so speakers tend to express their ideas in straightforward narrative or moral language.

As the Occupy [Your City Name here] movement moves across the country, there will surely be cities that have much more lax standards on actual microphones and bullhorns. But so far, in cities like, for instance, Atlanta, the human microphone seems to be sticking.

Videos of human microphone will eventually go viral when some speaker decides to toy with it and starts telling jokes, just for the sake of hearing them repeated by the lifeless voice–like the early text-to-speech computer programs. Until then, however, the human microphone will remain a widely-overlooked element of these protests: a necessary tool that still has a few bugs in the mainframe.