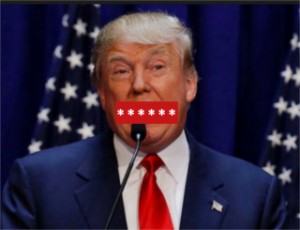 During the 2016 Republican primary, candidates have lobbed some fairly crude and crass language at each other, putting prudish news outlets in a predicament: whether, and how, to report accurately the often vulgar invective.

To wit: Donald Trump repeating a fan’s remark that his rival Ted Cruz was a “pussy,” and Lindsey Graham’s contention that his party had “gone batshit crazy.”

AP is the standard-bearer for journalistic style guidelines, and its standards editor Tom Kent posted an article Monday (entitled “When vulgarity becomes part of the story, what’s a news agency to do?”), meditating on that very problem.

Most subscribers to AP’s content, Kent writes, “tell us to avoid gratuitous vulgarity, carrying only what’s really important.” He continues:

What’s important, of course, is open to interpretation. Our first reaction to Trump saying “pussy” was that the specific word he used wasn’t essential to convey. So we wrote: “When an audience member shouted out an insult directed at Cruz — a vulgar term for ‘coward’ — Trump repeated the term and jokingly reprimanded the woman.”

My own feeling was that it would have been OK to use the word. A couple of weeks later, we used the actual word in a story about Trump’s speaking and tweeting style.

As for “batshit,” you could argue it was hardly necessary to quote that one word in Graham’s lengthy diatribe against Trump and the Republicans. But when a key senator and former presidential candidate becomes so worked up that he uses such vocabulary, that’s news in itself. We decided to use the word in our text services for newspapers and online.

[…] Our point here isn’t that “pussy” or “batshit” was absolutely right or wrong to use. Opinions will vary, including among AP staffers. The most important thing is for us to discuss how important such language is to a story, before the story goes out. We also need to be in constant touch with our subscribers so we’re aware how their standards are evolving.

Poynter notes that “This isn’t a new style ruling, but rather a look at the process the AP goes through when dealing with obscenity and vulgarity.”  They add:

Other news organizations have explained how they grapple with these issues in the past. Last year, The New York Times‘ Margaret Sullivan asked if the Times‘ vulgarity policy still worked. In 2014, an op-ed piece in the Times made the case for using profanity. The Wall Street Journal also looked at how it permitted profanity that year, noting that standards were changing.

Censoring can have the effect, of course, of misrepresenting the facts — either by downplaying or inadvertently exaggerating the coarseness of the original remarks.

For instance, those watching Trump’s “pussy” moment on network TV likely missed the fact that Trump uttered it sotto voce into the microphone. When the news network’s bleeped it out (in compliance with FCC regulations, rather than with in-house style guides) replacing a whisper with a harsh tone, reminiscent of a Jerry Springer shouting match, it had the effect of making the word sound somehow more vulgar than it actually was.

The Times‘ coyness with foul language has led to clouded reporting before, memorably in 2004, when the paper described an outburst from Dick Cheney as “an obscene phrase to describe what he thought Mr. Leahy should do.” That gloss that doesn’t quite pack the punch of what the Vice President actually said, which was “go fuck yourself,” a fact reported more lucidly by less prissy publications.

Buzzfeed, for example, is not so genteel. “We speak the language of the internet,” the site’s style guide says, “which is often hilarious and often profane.”

In the interest of transparency, Mediaite’s style guide prescribes: “When profanity is absolutely necessary in headlines, profane words should use asterisks.” We print profanity intact in the body of an article — making exceptions for certain racial and gendered vulgarisms. Though no candidate has tested our standards by using those words in a public setting. Yet.