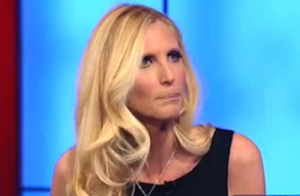 Ann Coulter is such a major advocate for Donald Trump, that it is almost physically impossible for her to embrace his immigration positions any more than she has. The conservative columnist gave an interview yesterday to BBC Radio 4, where she found herself in a peculiar situation as she defended her stance with respect to amnesty motions and migrations of the past.

Coulter knocked conservatives who “betrayed” the GOP by allowing for pro-immigration policies, and also tore into any notion that America is a “country of immigrants.” James Naughtie tried to pin her down by asking her to apply her position to Jewish immigration to New York during the 20th century.

“Oh God, not the Jews again,” Coulter muttered through Naughtie’s question. She proceeded to say that “the Jews” have not “overwhelmed” the population like immigrants have in recent years, and that it was absolutely necessary to stop letting in “rapist, drug dealer” Mexicans.

Coulter proceeded to defend Trump’s various proposals as she bid “good luck to the rest of the world” while the mogul put’s America first. She also went on a rant against Muslims when she asked “what good are they” when “most” partake in criminal behavior and rip off the government any time they’re not committing acts of terror.

“We’ve been very generous to the rest of the world, but it’s got to stop now,” Coulter said. When asked what would happen if Trump doesn’t become president, Coulter warned “we’ll be homesick forever.”

Listen above, via BBC Radio 4.