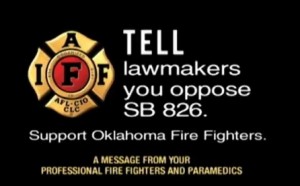 Holt called the ad “horrific and tasteless,” and added that “The victims and heroes of April 19th are not political pawns to be exploited whenever the Legislature seeks to reform a union negotiating process.”

Holt has called on the union to stop running the ad, which Rick Beam, president of Professional Firefighters of Oklahoma, says is not going to happen:

“The images used in our television ad are a reminder to the citizens of Oklahoma that firefighters are there to protect them every day,” said Rick Beam, president of Professional Firefighters of Oklahoma. “Firefighters in the state of Oklahoma respond every day to wild land fires, structure fires, medical emergencies and incidents such as the bombing of the Murrah Building.”

While Beam is correct to note that a group of firefighters has a lot more latitude regarding the use of images that depict themselves at work, that doesn’t mean there are no boundaries. There are many iconic images from the Oklahoma City bombing whose use would definitely cross the line. The brief shot used in the IAFF’s ad, though, doesn’t appear to do that. Here’s the IAFF’s ad:

Holt is joined in his criticism by Bobby Stem, a lobbyist for the policemen’s union that supports the bill:

Bobby Stem, a lobbyist for the state Fraternal Order of Police, which supports the bill, said showing the bombing aftermath in the commercial was “poor form” and unnecessary.

The ad itself does use an emotionally manipulative brand of persuasion, but it’s not as if firefighters haven’t earned that emotional bond with the public by putting their lives on the line every day. That doesn’t mean you have to agree with them, but it does mean they are owed a debt that includes being listened to.

Holt’s charge also trivializes the many occasions in which terrorist attacks actually are exploited for political ends, by people who have not earned it. To be fair, it’s not just Republicans who do this. Sometimes, it’s a Democratic candidate trying to out-Giuliani Giuliani, and sometimes, it’s her former chief campaign strategist.

The merits of the bill itself aren’t all that spectacular. One point of contention is the use of out-of-state arbitrators, which Holt says is unfair. As far as that goes, the  point of arbitration is that the arbitrator is theoretically as impartial as possible, but Holt’s case seems to hinge on making the arbitrator less impartial:

Holt has argued that the process is unfair to taxpayers because it often results in an out-of-state arbitrator deciding the fate of collective bargaining disputes involving millions of dollars of taxpayer money.

Whether you agree with Holt or not, his argument is, essentially, that a local arbitrator will tip the scales against the union.

There is an argument to be made that the firefighters’ use of the image is unwise, and perhaps more appropriate to a higher-stakes debate, but they have earned the benefit of the doubt on that score. If the Republicans ever want to feature footage of themselves doing what they do – perhaps a vagina audit – I promise not to argue with them.