It’s pretty horrible that Donald Trump once called a Latina Miss Universe winner “Miss Piggy” and “Miss Housekeeping.” But an old CNN write-up about her weight gain is kind of shocking too.

And while you could charitably call that a clickbait-y headline years before anyone coined the phrase “clickbait,” the content of the actual article isn’t that much better either: 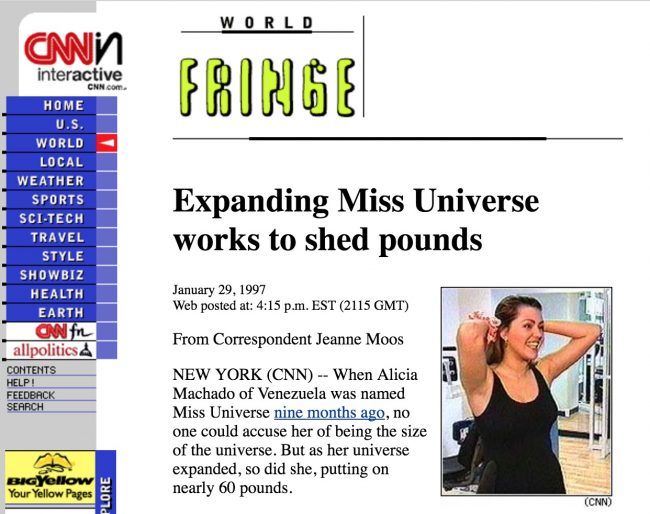 When Alicia Machado of Venezuela was named Miss Universe nine months ago, no one could accuse her of being the size of the universe. But as her universe expanded, so did she, putting on nearly 60 pounds.

Indeed, the reigning Miss Universe learned the hard way that an extra 15 or 20 pounds can gain you a ton of publicity. But now she’s determined to shed at least 15 pounds, though the loss of her Miss Universe crown is no longer an issue.

Later on in the article, there’s this gem: “Since winning the crown, the former Miss Venezuela went from 118 pounds to — well — a number that kept growing like the size of the fish that got away.”

Though as it turns out, back then Trump said after she put on the weight, “we had a choice of: termination or do this.” What was “this”? Well:

The pageant’s meaning of “do this” was for Machado to get her weight down to about 130 pounds.