Orlando Rhetoric Again Shows How Childish, Idiotic & Divisive Our Pundits, Leaders Can Be 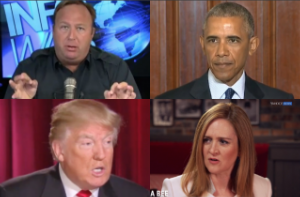 “Now you know why evil will always triumph over good. Because good is dumb.”

It’s been more than 72 hours since the worst mass shooting in U.S. history — carried out by radicalized Muslim terrorist — resulted in more than 50 people dead and more than 50 injured. And one thing is abundantly clear: We live in a society that is cursed with some the most shallow, patently stupid, impossibly polarized pundits on this Earth. One would think — since they are considered the best in their craft given their place on the media food chain — that we would get some real insight and/or compelling commentary to put what happened in Orlando in proper perspective. But that hasn’t happened in some circles, not even close…

Even the politicians — from the president to the Democratic and Republican nominees — all sound like thin-skinned, undisciplined children. And it just shows you just how far gone we may be in terms of hatred in this country for things and people we simply disagree with if the analysis and so-called leadership we’re seeing is any indication.

“He (Trump) is basically working with ISIS to kill us. They are working together. Just remember what I’m saying… Because every time you go after the Muslims and you talk about how they shouldn’t come into the country and how they’re all a bunch of whatevers, you are saying to ISIS, make another video to show people who are sympathetic to your cause, and don’t think they haven’t made many videos showing Donald Trump. He is a dangerous menace to the country,” later adding, “Do you think that because he is the recruiter in chief and by his words he’s getting more people to go on the side of ISIS, that he could be considered treasonist? I mean, that is against the Constitution, that is against America. That’s a treasonist act in my opinion.”

Yup. Donald Trump is working with ISIS to kill us all. He should hanged for treason.

Get used to this every time ISIS or someone ISIS-inspired carries out an attack: It’s all Trump fault… because ISIS never existed until he came along, right? And the terror group has been looking for serious motivation to come from somewhere for some time now…

We would cut mass shootings down by over 75% if our nation banned all white men from this country.

Wonder why nobody calls for that?

So Mr. King is calling on banning… himself?

Alex Jones, InfoWars: “The attacks on Orlando were a false flag terror attack.”

“What the f*** are you even talking about? Stop thinking and do something to improve our society! “Sit[ting] quietly in a room with your eyes closed, talking to nobody,” isn’t a reasonable solution towards fixing our mass shootings.

Funny how Ms. Bee never reacted this way when the president has made the same request around asking Americans to pray following other past tragedies. But that’s the new go-to meme following homeland terrorist attacks if San Bernardino and Orlando are any indication: If you pray for the victims and their families, you’re a fool who lazily worships something that doesn’t exist without acting any further. You’re also a person who doesn’t care remotely as much as Samantha Bee does about the victims of Orlando, who is really doing something about it by screaming about how to properly mourn on her show for a few minutes. Cheap rhetoric for cheap applause, which is what Sam got here. Curious when she’ll actually be doing “something to improve our society”… because only lecturing doesn’t qualify.

President Obama: on how to define the enemy: “That’s the key, they (the Republicans) tell us,” Obama said in a news conference yesterday. “We can’t beat ISIL unless we call them ‘radical Islamists’,” adding, ““What exactly would using this label accomplish? What exactly would it change? Would it make ISIL less committed to trying to kill Americans? Would it bring in more allies? Is there a military strategy that is served by this? The answer is none of the above. Calling a threat by a different name does not make it go away.”

This comes from the Commander-in-Chief who isn’t bringing in more allies nor appears to have a clear military strategy despite having years to put one together. Of course, this is the same petulant, political reaction the president had after the Paris attacks in November: Blame the Republicans because his strategy isn’t working and his reaction is too tepid. Note: Mr. Obama is being so childish here, he can’t even bring himself to call the Republican governor of Florida now three days after the attack (as any president would in these kind of situations). A Divider-in-Chief like one we’ve never seen before…

Also note: This perspective on language coming from the president is beyond rich in irony, as he and his administration still continue to insist on calling ISIS — which is how everyone else refers to the terror group — ISIL. As Mr. Obama said, simply calling a threat by a different name does not make it go away.

Donald Trump: On the day after the attacks, the obsessed what-is-everyone-saying-about-me candidate decided he didn’t like a headline in the Washington Post and promptly stripped the paper of its press credentials. In the end, this race will be decided on Trump’s temperament (which is fleeting), impulse-control (which he doesn’t possess) and discipline (see: temperament). He continually illustrates an inability to change on all three fronts. Attack a publication if you think it’s being dishonest, absolutely. Suppress it altogether? Absolutely not.

He may have succeeded in the primary despite these flaws, but can’t continue to act this way in the general. The Washington Post decision only makes him look like he can’t handle the kind of criticism — fair or unfair — that comes with the job.

Hillary Clinton: has this exchange George Stephanopoulos this in December:

STEPHANOPOULOS: “So what’s the problem with (saying) radical Islam?”

CLINTON: “Well, the problem is that that sounds like we are declaring a war against religion. And that, to me, is number one, wrong.”

Fast forward to the day after the Orlando terror attack and her interview with CNN’s Chris Cuomo:

“I have clearly said that we face terrorist enemies who use Islam to justify slaughtering innocent people. And, you know, whether you call it radical jihadism or radical Islamism, I think they mean the same thing, I’m happy to say either.”

Translation: “I don’t have Bernie Sanders to worry about anymore (no annoying left flank to deal with) and will do a 180 on this stance solely based on the opponent I’m facing. It also allows me to separate myself from Obama and sound strong where he sounds weak.”

But don’t worry, you can trust all the promises she’s making as a candidate now…

Basically every gun-right advocate: “The 2nd Amendment says we have the right to bear arms.” No argument there. But can someone explain what the practical use-case is for a (correction) high-capacity, semi-automatic rifle, which is used for military/war purposes by trained professionals? Why should the average person be able to buy such a weapon? And how does the narrative in every cable news debate over this topic somehow morph into the extreme of taking guns away or not having the right to defend oneself?

Here’s one practical idea if you happen to run a network: Schedule a Town Hall on the Orlando attack with Trump and Clinton obviously appearing separately per the standard format. Let’s hear the solutions side-by-side. It wouldn’t have to be sanctioned by the DNC or RNC. And would likely do well from a critical and business perspective. Just a thought…

Tragedies are supposed to bring us together. This one divided us further. It’s another bad scene right out of Mel Brooks film that might as well be called Idiots R Us … because to the rest of the world unfortunate enough to be privy to our airwaves, that’s exactly what we look like.