Over $100,000 Has Been Raised For San Bernardino Victims… By Muslims
GOOD DEEDS

Over $100,000 Has Been Raised For San Bernardino Victims… By Muslims 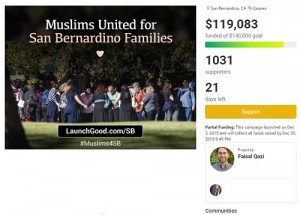 A crowdfunding campaign launched by a Muslim neurologist has raised over $100,000 in just four days for the families of the San Bernardino shooting victims.

According to the Los Angeles Times, Faisal Qazi of California’s “Inland Empire” region — which includes Los Angeles, Riverside and San Bernardino counties — launched “Muslims United for San Bernardino Families” on the crowdfunding website Launch Good. The campaign, which Qazi initiated the day after the mass shooting on Dec. 3, has raised over $118,000 towards its initial goal of $140,000.

When Qazi started the fundraising campaign, he didn’t yet know that the shooters were also Muslim. The subsequent revelation that Syed Farook and Tashfeen Malik were radicalized, however, only stirred his resolve further.

“The American Muslim community has had extensive and intense conversations in the last decade about our role in society,” he said. “What you’re seeing is the coming of a new generation of American Muslims being emotionally and physically invested in whatever transpires in society.”

Launch Good, as it turns out, was started by Chris Blauvelt of Detroit. Blauvelt converted to Islam just three months before the Sept. 11, 2001 terrorist attacks.

“We realized we had to do more than get good jobs as doctors and engineers and buy houses in the suburbs. We have to give back to the communities we live in, the American community,” he said.

According to Blauvelt, Qazi’s San Bernardino campaign is outpacing any other fundraiser in the website’s history with a rate of $1,000 per hour.