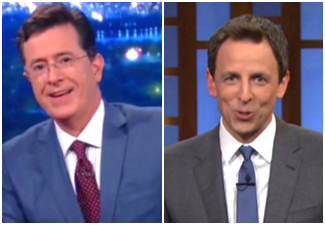 For Stephen Colbert and CBS, this wasn’t the game plan.

Because now…just three months after so much hype and so much love went into Mr. Colbert’s debut as the new host of Late Night, the former Comedy Central star has somehow fallen into 4th place where it matters most. In the all-important demo, he’s now being doubled up (and then some) by NBC’s Jimmy Fallon (outscored by 137 percent) and hasn’t beaten ABC’s Jimmy Kimmel in over a month. But here’s where CBS brass is likely doing a double-take: During the week of November 23-27, the 11:35 PM Late Show on CBS was beaten by Seth Meyers, who happens to be on one hour later (12:35 PM) on the Peacock.

Of course, these numbers regarding Colbert/Meyers came on a shortened week (November 23-27). So to avoid accusations of cherry-picking, here’s a trend worth noting since Colbert launched (via NBC):

If there was ever an example of a trend, you just saw it. Then there’s this: Colbert’s numbers are down almost 45 percent since his debut week, and have only increased once week-to-week since the week ending on September 21st, trending downward slowly but consistently.

One more note: Colbert averaged a .58 in the demo in November (a sweeps month), a 16 percent rise over Letterman’s numbers last year. An improvement is always good news, but given Letterman’s decline at the end of his career (save for his final week sendoff), just 16 percent over a poor number and finishing 3rd or 4th can’t be what CBS thought it was signing up for.

But the program is still relatively new and still needs to establish its footing, right? Well, impressions are important, too. And it hasn’t helped that many perceive Colbert’s offering to be too political, too one-sided (primarily slanting left). As noted here a few weeks ago, a recent Hollywood Reporter poll of late-night viewers shows that only 47 percent of self-described Democrats watch Colbert, while only 17 Republicans say they do, or a 30-point spread. For Fallon, the spread is just five points (36-31 Democrats). For Kimmel, the spread is one (34-33). The perception of partisanship regardless of which way it leans, particularly when the primary brand is political satire as is the case with Colbert, is enough to help move the needle the wrong way. There’s also this factor: Fallon and Kimmel are very, very good at what they do and have enjoyed far more at-bats (as in years worth) than Colbert, who is trying to do this show without his old character but oftentimes falls right back into it.

CBS hired the 51-year-old to improve on Letterman’s ratings with younger audiences. The former Comedy Central host accomplished that nicely at first, but the numbers are either stagnant or sinking now. Other horses–even those racing one hour later out of the starting gate–are beating him now.

Is CBS happy with Colbert? Maybe.

Nervous is probably the better word to apply right now.