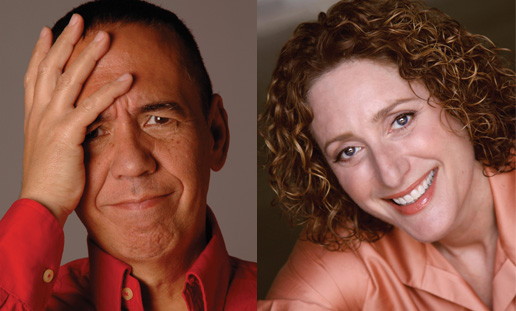 Judy Gold took the stage with questions about Gilbert Gottfried’s childhood, career, and life. The mostly older crowd, though, was there for the “f-cks.” Gottfried told stories from his new book, “Rubber Balls and Liquor” (read it again, you’ll get it), about his first jokes, his grandmother, dropping out of high school and his first performances; but he was at his best and the crowd at their happiest when he was looser, riffing and, working blue.

What They Said
“The people who get the joke don’t need an explanation. Those who don’t get it won’t understand the explanation.”
– Gilbert Gottfried explains his lack of explanations

“I do realize the tragedy. That’s where the jokes come from!”
– Gilbert Gottfried views comedy as tragedy’s roommate (the kind who sticks out his tongue as his roommate cries)

“That was the first time I ever jerked off to the Diary of Anne Frank”
– Gilbert Gottfried, on Natalie Portman. We did not ask him when the second time was

“It was up between me and Liam Neeson… Of course I, at the time, was up for Schindler’s List”
– Gilbert Gottfried dishes on how backroom Hollywood dealings go down

PANEL RULES!
Some audience behavior seems to repeat itself panel after panel. We’ll be updating a running list of “PANEL RULES!” that will help ensure that you are not the dweeb of the Panel Nerds.
Panel Nerds don’t like…Cause Gauze
Gilbert Gottfried is there to talk about his life, his work, and his comedy. Just because you have something in the news you’d like to complain about, that doesn’t mean you should ask Gilbert Gottfried about it. In an interview where he didn’t once discuss current events, why bring up Occupied Wall Street?