Peggy Noonan: Obama ‘Wise’ to Give in to GOP Demand to Delay Obamacare for 11 Months
video

Peggy Noonan: Obama ‘Wise’ to Give in to GOP Demand to Delay Obamacare for 11 Months 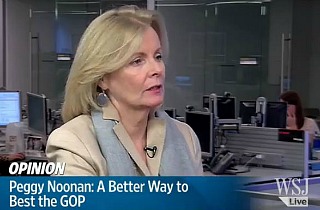 Wall Street Journal columnist Peggy Noonan joined editorial board member Mary Kissel on Monday where she advised President Barack Obama to give in to the GOP’s latest demands in order to pass a resolution which continue to fund the government. She said that it would be “wise” of the president to agree to an 11 month delay of the Affordable Care Act in order to fix its flaws and sell the American people on the law’s benefits.

Noonan began by observing that Obama is not quick to appeal to the negotiating table when dealing with the Republicans in Congress.

“I think the president, at least in the early years of his presidency, had this sense that if he talked straight to the American people, he would be doing a [Ronald] Reagan or a [Richard] Nixon,” Noonan said. “This president has often tried to do that, but it doesn’t work. It’s almost as if things are stuck.”

RELATED: Ed Henry and Jay Carney Go at it Over ‘GOP Talking Point’ on Not Negotiating with GOP

When asked how Obama could resolve this crisis, Noonan said that it would be “wise” to partially capitulate to the GOP’s demand to delay the ACA by nearly one year.

She said that it would be “good policy” and would benefit the president politically if he asked Congress to “work with me and make this thing work better.” She said that, in this period, he could both address the problems with the law and build public support for the “principle” of universal health care insurance coverage.