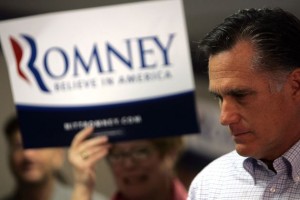 The Wall Street Journal‘s Peggy Noonan has been blunt in her criticism of Mitt Romney‘s campaign recently, and she’s not backing down in her latest column for the financial paper. Au contraire, her language is getting harsher. “Incompetent” was her being polite, she said. What she meant was the campaign is a “rolling calamity.”

Citing a veteran Republican pollster who said the “pendulum has swung toward Obama,” Noonan asked: How did we get here? How can we turn it around?

…she then helpfully provided answers in the form of a numbered list. Some of Romney’s woes: Democrats defined him before he had a chance to define himself; perceptions of the economy are improving; the president had a strong convention, while Romney’s was weak; and Romney has been “reactive,” often needing to assert damage control, but also failing “to force the Obama campaign to react to its proposals and initiatives.”

But all is not lost, Noonan contended. With more than a month between the first debate and the election, there’s “enough time for a healthy spiral to begin.”

But: The Romney campaign has to get turned around. This week I called it incompetent, but only because I was being polite. I really meant “rolling calamity.”

Ouch. In some of the responses she received to that earlier remark, Noonan said many “brought up the name James A. Baker III, who ran Ronald Reagan‘s campaign in 1984 (megalandslide—those were the days) and George H.W. Bush‘s in 1988 (landslide.)”

What Romney needs to do: embrace “the Baker Way.”

Mr. Baker’s central insight: The candidate can’t run the show. He can’t be the CEO of the campaign and be the candidate. The candidate is out there every day standing for things, fighting for a hearing, trying to get the American people to listen, agree and follow. That’s where his energies go. On top of that, if he’s serious, he has to put in place a guiding philosophy that somehow everyone on the plane picks up and internalizes. The candidate cannot oversee strategy, statements, speechwriting, ads. He shouldn’t be debating what statistic to put on slide four of the Powerpoint presentation. He has to learn to trust others—many others.
[…]
A campaign is a communal exercise. It isn’t about individual entrepreneurs. It’s people pitching in together, aiming their high talents at one single objective: victory.

In this area, Noonan said, Romney “needs to get his head screwed on right.”