Piers Morgan To Take Over 9pm CNN Slot In January

Piers Morgan To Take Over 9pm CNN Slot In January 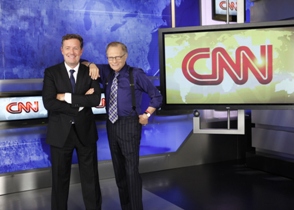 The first report of this came from an unlikely source: Ali Velshi‘s Twitter.

Mr. Morgan, the British-born journalist and talent show judge, will host an interview show weekdays at 9 p.m., the network said. A name for the show was not announced.

It is an extraordinary coup for Mr. Morgan, who most American viewers know only as a judge on NBC’s “America’s Got Talent.” A deal between the parent companies of NBC and CNN cleared the way for Mr. Morgan to take both jobs.

He is also expected to retain a role on ITV, the British network, where he hosts an interview series called “Life Stories.” His guests have included Gordon Brown, Simon Cowell, Sharon Osbourne, Richard Branson, and Geri Halliwell.

Also, King’s last day will be December 16, according to an internal CNN memo.

It is interesting Morgan not only gets to keep his NBC game show judging gig, but his ITV role as well. The 9pmET slot is one CNN needs to do well, and Morgan will be stretched in several directions from the onset.

Full CNN release below. Key points: he’ll be based in New York City, he’ll write a column for CNN.com and CNN/U.S. President Jon Klein calls him a “natural fit” for their prime time line-up, which is being rolled out in a way this week – today’s announcement comes a day after the Parker Spitzer 8pmET announcement.

Global media personality and veteran newspaper editor Piers Morgan will host a candid, in-depth newsmaker interview program on CNN beginning in January, it was announced today by Jon Klein, president of CNN/U.S. The new program will air weeknights on CNN/U.S. at 9 pm ET/PT and will air worldwide on CNN International in more than 200 countries.

Known to United States viewers primarily for his role as a judge on NBC’s No.1-rated America’s Got Talent and as the winner of Celebrity Apprentice, Morgan has had a long career in journalism in the United Kingdom as a newspaper editor and, more recently, as the host of the popular television interview program Piers Morgan’s Life Stories. He will now bring his penetrating interview style and gift for unearthing the surprising detail to American television and to CNN viewers around the globe.

“Piers has made his name posing tough questions to public figures, holding them accountable for their words and deeds,” said Klein. “He is able to look at all aspects of the news with style and humor with an occasional good laugh in the process. He is a natural fit with Anderson Cooper, Eliot Spitzer and Kathleen Parker in our prime time line up, and the ideal choice to update the storied tradition of newsmaker talk on CNN.”

Morgan began his career as a reporter for The Wimbledon News and then as a columnist at The Sun. In 1994, when Morgan was 28 years old, Rupert Murdoch appointed him the youngest ever editor of the News of the World, and the youngest national newspaper editor in Britain for 50 years. Two years later he moved to the Daily Mirror, where he served as editor-in-chief from 1995 until 2004. The paper won numerous journalistic awards including Newspaper of the Year at the prestigious British Press Awards in 2002 for its coverage of the 9/11 terrorist atrocity in New York. After his controversial departure from the Mirror, Morgan went on to become a best-selling author, a regular media columnist, and host of his own interview programs on the BBC and ITV, as well as appear as a judge alongside Simon Cowell on the No.1-rated show Britain’s Got Talent.

“I am thrilled to be joining CNN, and very much looking forward to bringing my own style of interviewing to the world’s biggest, and best, TV news organization,” said Morgan. “As a young journalist in Britain, I watched CNN’s astonishing live coverage of the 1991 Gulf War, and felt enthralled by the courage and brilliance of the journalists involved in that coverage. Years later, I watched Anderson Cooper’s visceral reports from New Orleans after Hurricane Katrina, and felt equally enthralled by his passionate and relentless search for the truth. Perhaps most pertinently, I have watched Larry King Live for much of the last 25 years, and dreamed of one day filling the legendary suspenders of the man I consider to be the greatest TV interviewer of them all. To now have the chance to work with Larry and Anderson, and to try and continue the outstanding journalistic legacy created by them, and so many others at CNN, is both a great honor, and a great challenge.”

After leaving the Daily Mirror, Morgan began writing a monthly interview column for GQ magazine where he interviewed some of the biggest names in global entertainment and politics. In 2004, he moved into television, co-hosting a Channel 4 current affairs show, Morgan & Platell, and two BBC interview shows, Tabloid Tales and You Can’t Fire Me I’m Famous. In 2008, Morgan joined ITV, where he hosted a documentary travelogue show called Piers On…, reporting from cities including Shanghai, Las Vegas and Dubai. He also developed a new talk show, Piers Morgan’s Life Stories, where he conducts one-on-one intimate and lengthy sit-down interviews with celebrities, business and political leaders, including Prime Minister Gordon Brown. It has been consistently the No. 1-rated talk show in Britain for the last two years.

Morgan will continue to write his two regular columns for the Mail on Sunday newspaper – one on sports, the other a weekly diary of his life, and he will also provide regular columns to CNN.com.

Morgan is an accomplished author, writing eight books including three best-selling volumes of diaries: The Insider, Don’t You Know Who I Am, and the recently published God Bless America.

He is also co-founder and editorial director of First News, Britain’s first ever national newspaper for children.

Morgan re-married in June, to Celia Walden, and has three sons from his first marriage – Spencer, Stanley and Bertie.

He will be based in New York, and also work from Los Angeles and London.

CNN Worldwide, a division of Turner Broadcasting System, Inc., a Time Warner Company, is the most trusted source for news and information. Its reach extends to nine cable and satellite television networks; one private place-based network; two radio networks; wireless devices around the world; CNN Digital Network, the No. 1 network of news Web sites in the United States; CNN Newsource, the world’s most extensively syndicated news service; and strategic international partnerships within both television and the digital media.