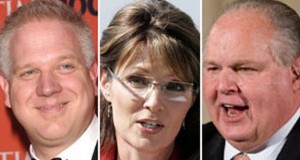 One could argue that the only thing President Obama has going for his these days is the fact that the GOP can’t seem to dig up a viable leader for their party. Or at least a leader who actually wants to run for election (as opposed to, say, ratings). Obama strategist David Plouffe told David Gregory over the weekend that the fact Glenn Beck, Rush Limbaugh, and Sarah Palin, all powerful and polarizing media figures, are nominally the heads of the GOP only spells trouble for the party.

I think the–I think right now–and this is a problem for them long term–I do think that Rush Limbaugh, Glenn Beck, Sarah Palin, they are the leaders of the party…There, there is an intolerance in that party and an extremism that I think is where the real energy is. And so I think, as you see in ’11 and ’12, as that presidential primary, those are the people that are going to come out to vote. So I think that’s where the real energy is, and I think particularly in, in elections where more people vote, in presidential elections where you have a lot more younger people, minorities, independent voters who skew a little bit more moderate, that’s going to be a big problem. So we’ll just have to wait and see. But let’s get this–through this election first, and then we’ll be right on to the next one.

However, Plouffe also noted that in 2007 Barack Obama basically came out of nowhere and that a Republican might be able to pull of the same. Tick tock? Watch below.