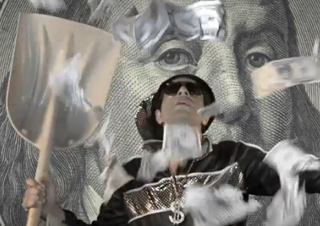 The debt crisis that threatens to engulf the entire legitimacy of the American monetary system (or something) next month has been the biggest story of this news cycle by far, with not even a sex scandal involving a tiger costume being able to dethrone it. Naturally, this means some enterprising youth somewhere made a rap video about it. This time, it’s political rapper Remy, who has a word or two for us about quantitative easing.

Remy advertises himself as a political video maker of sorts, noting on his website that his YouTube career began in 2006 and has expanded with “substantive geopolitical works with videos such as “Two Percent Milk “Eggs Over Easy,” “It’s Been Declined,”and “Warcraft: The Rap.” As with the video below, it’s not entirely clear whether Remy is joking.

In terms of rap rhyme quality, “Raise the Debt Ceiling” is not entirely terrible, partly due to what makes it not quite funny: that it is entirely unclear whether Remy set out to write the best rap verses he could about the debt ceiling debate or whether he was out to make a mockery out of the current looming debt crisis (if the idea was the latter, the President and everyone in Congress beat him to that punch a long time ago). Here are some of the best lines (all the verses are available on his YouTube page):

Social Security surplus?
Oh, guess what? it’s gone
I got my hands on everything
like Dominique Strauss Kahn […]

ain’t got no Medicare trust fund
son, that’s just absurd
spending every single penny that
we see, son, have you heard? […]

Credits for this creation are split between the artist himself and Reason.tv, so thank/blame each accordingly. The video via Reason.tv below: