You may have noticed this week that the Donald Trump campaign and some conservative websites have been attacking Hillary Clinton for supposedly boasting about raising taxes:

Hillary Promises ‘We Are Going To Raise Taxes On The Middle Class’ [VIDEO] https://t.co/pff8HsUYeS pic.twitter.com/CQHniY7i1u

Has the Clinton campaign cleaned up her "We are going to raise taxes on the middle class" pledge from Omaha speech? https://t.co/fa2cdwKWUu

"We are going to raise taxes on the middle class!" says Hillary Clinton. WATCH: https://t.co/5Xfn2C4B4W pic.twitter.com/NAFRtfKR9n

Now, this is exactly like that smear on Marco Rubio from Team Cruz a couple months ago when they claimed he said “not many answers in it” about the Bible. He said “all the answers are in it.”

Listen to what she said for yourself:

WATCH: Is Donald Trump attempting to distort Hillary Clinton's words about taxes? Take a look at the clip.https://t.co/54hSElr1TO

Hillary Clinton did not say “we are going to raise taxes on the middle class.” She clearly said “aren’t.” This isn’t really up for debate. Like with Donald Trump, there is plenty for conservatives to fairly attack Clinton on without making things up.

But what truly stands out about this is the methodology of how PolitiFact debunked this. They analyzed the audio.

No, I’m not kidding:

It’s a classic case of she-heard-he-heard, so we asked experts to arbitrate. They agreed with the Clinton camp and offered some technical evidence to prove it. Get ready for some science.

Alan Yu, a linguistics professor at the University of Chicago who specializes in phonology, ran the audio through a computer program called Praat, which analyzes phonetics.

By analyzing the sound waves, we can see that Clinton was saying “aren’t,” because she definitely pronounced the “n,” though she didn’t really hit the “t.”

They even shared a screengrab from the program: 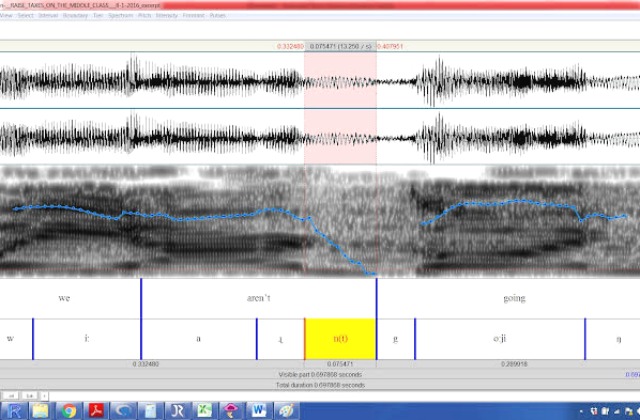 She clearly said “aren’t.” And yet this has become such a meme on the right that we have to get this kind of in-depth sound analysis to debunk it…