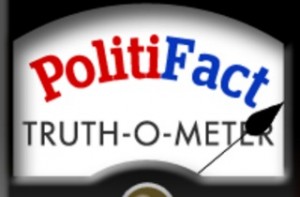 UPDATE (4/27/16): After this piece was published, Politifact updated the piece and added the following addendum:

After we published this item, we heard from readers and others who said our description of a transgender woman made it sound as if there is no public debate over transgender issues or how gender is defined. We did not mean to suggest that, and we have edited our report to more fully reflect that ongoing debate. Our rating still stands, however, because the ad distorts Trump’s views on access to public bathrooms.

Below is the original column:

If you’re like me, you’ve been closely following the recent cultural, political, and philosophical battle over transgenderism, the gender spectrum, and to what extent one has an obligation to honor someone else’s identity. But it turns out there was no need for all that debate; PolitiFact ruled that it is objectively true that transgender women are women, period.

Here they are yesterday, ruling on a Ted Cruz statement that Donald Trump thinks “a grown man pretending to be a woman (should) be allowed to use the women’s restroom”:

Further, it’s not accurate to say that transgender women are men, as PolitiFactTexas has reported. Though there isn’t universal agreement on this point, medical experts typically agree that a transgender person is someone who identifies differently from their assigned sex at birth. In short, a transgender woman is a woman and not “a grown man pretending to be a woman.”

Well, that settles it. Good game, social conservatives, but the facts are in. There is simply no room for disagreement at all.

Of course right off the bat, they appear to be contradicting themselves. It’s not accurate– full stop– that transgender women are men. But “there isn’t universal agreement” on that matter among medical experts? I’m not a Pulitzer-winning professional fact-checker, but I’m pretty sure that when there’s debate about whether something is true, you don’t state as a matter of fact that it is.

More to the point, I’ve always viewed the debate over gender as essentially a cultural one. Just as our country debated the definition of “marriage,” there are some who believe our culture should accept and affirm transgender individuals as the gender of their choice, and others who are skeptical of the notion that society should bend longstanding cultural norms.

Both sides make good arguments, and ideas about gender vary from society to society. So I was a little taken aback to see PolitiFact state rather simply that one those cultural perspectives was just 100% wrong in the course of a short paragraph.

So how did PolitiFact arrive at the conclusion that there was one and only one correct answer on the issue? They actually made that ruling back in December, while judging another Cruz claim that the Obama administration was forcing boys and girls to shower together, a claim they ruled False.

The argument back then was laughable.

For starters, it’s not factually accurate to say that letting transgender students into locker rooms amounts to boys being permitted to shower with girls. A transgender individual is a person whose gender identity, expression or behavior is different from those typically associated with their assigned sex at birth, according to the National Center for Transgender Equality. Broadly, this can mean a person born a boy identifies as a girl or vice versa. A transgender also may receive hormone treatments and undertake sex reassignment surgery.

Pat Griffin, a professor emeritus at the University of Massachusetts, Amherst, advocates for including lesbian, gay, bisexual and transgender students in college and interscholastic athletics. Griffin wrote in September 2015: “It is important for policy-makers to understand that transgender girls (who were assigned a male gender at birth) are not boys. Their consistent and affirmed gender identity as girls is as deep-seated as the gender identity of non-transgender girls.”

That was seriously the entire argument: transgender individuals are their gender of choice because transgender activists say so. I’m actually a little embarrassed that they ran a piece based on an argument that would fail a high school writing assignment.

The simplicity and fallacy of that argument led to criticism at the time, which in turn led the author in question to try again. This time his answer was better, pointing out that the psychiatric consensus was that transgender individuals really were the gender of their choice.

After that fact check posted, we asked the American Psychiatric Association if we’d erred in stating a transgender girl is not a boy and vice versa. New York psychiatrist Jack Drescher told us by phone our declaration reflects the professional consensus of medical experts.

Then again, Drescher, who served on the association’s work group that drafted a 2013 change of the previously accepted diagnosis of gender identity disorder to gender dysphoria, allowed that Americans in general haven’t necessarily embraced the consensus or policy implications. “For some people,” Drescher said, “your gender is your chromosomes or your anatomy. It’s become a cultural issue in a way.” He added: “I don’t think the professional communities have thought it out fully, the implications. A lot of thoughtful parents are scared and worried.”

First of all, it’s telling that the psychiatrist picked to represent his profession comes straight out and says that maybe they haven’t thought it out fully. Drescher goes on to tell PolitiFact that there is a significant minority who believe that taking transgender individuals claims at face value does more harm than good.

If PolitiFact had decided to consult a lawyer or a priest or a biologist or a philosopher about who is and isn’t a man, they’d be told that it was a matter of what the law says, what God says, what chromosomes or brain structure say, or what logic dictates. The “expert” consensus on gender depends entirely on which “experts” you believe should contribute to our understanding of gender. Inevitably, we end up deferring to the perspective that echoes our preexisting views on the matter.

In this case, Cruz’s actual statement made his views on the matter perfectly clear; your gender is equivalent to your biological make-up.

The idea that the federal government is coming in saying that boys, with all the god-given equipment of boys, can be in the shower room with junior high girls – this is lunacy. And I bet you there are a whole lot of parents – particularly parents of daughters – that are not eager to have the federal government saying, ‘Guess what? Your daughter has to shower with a boy, if he wants to be in there.’

You’re welcome to believe that Cruz’s view on gender is backwards, hurtful, and ignorant, or that his views on transgender bathrooms are a solution in search of a problem. But fact-checking his statement under his stated understanding of gender, a view that millions of Americans (until recently ALL Americans) share, he is undeniably correct; boys really will be showering with girls.

PolitiFact’s response was pretty darn tone deaf. There isn’t some sort of general cultural taboo about teens of different gender identities showering together. When parents hear “boys and girls showering together,” their concern really amounts to matters of genitalia. There’s a reason a majority of Democrats and Republicans alike back Cruz’s stance on that issue, and for PolitiFact to declare his concerns a lie insults the majority of Americans as much as it does Cruz.

So should PolitiFact have ruled that Cruz was telling the truth in both cases? Not necessarily. The Washington Post probably handled it best by not passing judgment on whether Cruz’s view of transgenderism was correct. But they did give him Two Pinocchios, arguing that his inexact language might give the false impression that boys who identify as boys would be showering with girls. A perfectly fair criticism, in my opinion.

What’s not fair is erasing a serious, highly contested debate out of existence because you want to nail a Republican presidential candidate as “wrong” on an issue. You’re welcome to think that, of course. But don’t try telling me it’s a fact.