It hasn’t even been a week since ESPN gave self-professed “not transphobic” Curt Schilling the boot after they concluded that a meme he shared on Facebook was, indeed, transphobic. Schilling, for his part, has continued to behave just like that aunt you have who shares 15 image macros of varying levels of cringeworthiness a day. In other words, the man is still hitting that “share” button without doing a lot of fact checking.

Shareable images full of manufactured outrage have replaced the “fwd: fwd: fwd: fwd: fwd:” emails of yesteryear. You’ve probably seen some of the more common ones that warn of the latest gang initiation “game” or suggest that President Barack Obama had a “foreign student” I.D. at Columbia. A quick Google search usually dismantles these rumors, but still, they get shared. Curt Schilling, with his nearly 18,000 followers on Facebook, is a chief offender when it comes to perpetuating these made-up stories.

Here is one of his latest shares:

That is a photo of the late Prince with a very anti-Democrat quote slapped over it. Prince never said that.

As of this writing, Schilling hasn’t removed the shared image from his page despite numerous callings out from a variety of people and publications. Some have taken it upon themselves to show him how easy it is to attribute false, agenda-pushing quotes to notable figures by creating image macros of their own that feature his picture. 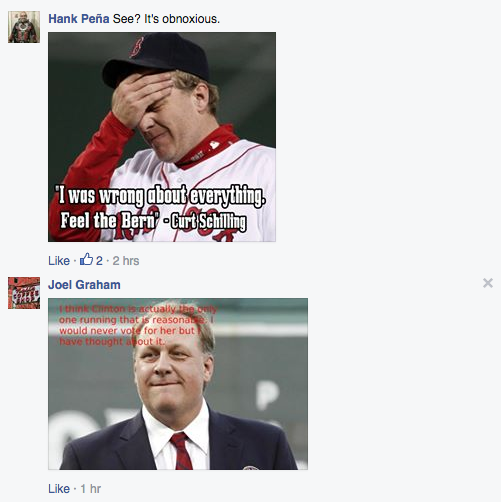 Schilling probably doesn’t care about those mock-ups. The former baseball star lost his job at ESPN over sharing a Facebook post and he is still doing it, just like that aunt of yours does after you’ve sent her a Snopes link for what feels like the millionth time. The siren’s call of these angry images is just too strong.