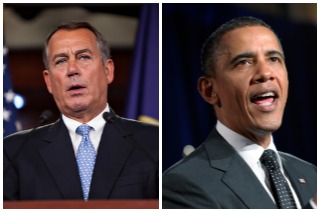 Republicans lie more — at least according to the Tampa Bay Times’ PolitiFact. A new study found that the fact-checking operation finds Republicans to be less trustworthy than Democrats, based on the number of false claims made during President Obama‘s second term.

The study, by Center for Media and Public Affairs (CMPA) at George Mason University, took into account 100 PolitiFact-checked statements made by Democrats (46 claims) and Republicans (54 claims) in the first four months of Obama’s second term. The results? PolitiFact deemed Republicans were loose with the facts three times as often as their left-leaning counterparts.

The findings were also consistent with the CMPA’s previous study that found PolitiFact (also known as the bane of Rachel Maddow‘s existence) gave more negative ratings to the Romney campaign than to the Obama campaign during 2012.

PolitiFact has fielded criticism from those both on the right and left, and its editor Bill Adair told Poynter the operation doesn’t seek to measure “which party tells more falsehoods.” He added, “The authors of this press release seem to have counted up a small number of our Truth-O-Meter ratings over a few months, and then drew their own conclusions.”