Poll: Actual People Care More About Guns Than Any Other News Story

Poll: Actual People Care More About Guns Than Any Other News Story 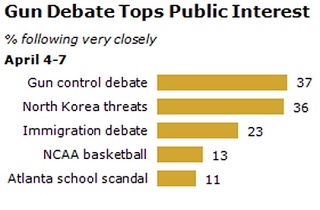 “There are three kinds of lies: lies, damned lies, and statistics” goes the famous quote, and then there are polls. There’s a tendency to see what we want to in polls, a tendency that doesn’t often end well. Case in point: a Gallup poll that was cited on this website Wednesday to support the conclusion that “Only Politicians And The Media Care About Gun Control And Immigration.”

That conclusion, particularly where guns are concerned, is belied by several months of Pew polls that show Americans are following, and have been following, the debate over guns more closely than any other news story. Can both polls be right?

The Gallup poll cited by my pal Noah Rothman did, indeed, place the issue of guns and gun control ninth on a list of issues, but does that mean that Americans don’t care about the issue? The poll asked respondents to volunteer what they thought was “the most important problem facing this country today,” and only allowed for a single response. Twenty-four percent answered “the economy,” but since they had no opportunity to give second or third answers, it doesn’t seem logical to conclude that they care only about the economy, and don’t care about anything else. By that metric, this poll appears to say that Americans care a great deal about the economy, but care next to nothing about taxes, or a “lack of money.”

Additionally, thinking an issue is the “most important problem” doesn’t necessarily mean you care about it the most, or even all that much. If someone asked me that question, I’d probably answer “the economy,” too, but there are a great many issues I care more about, many of which contribute to that larger issue. I don’t know exactly what you should conclude from this poll, but it isn’t that Americans “don’t care” about anything but the economy, a conclusion that was basically shared by Gallup in their own analysis of the poll.

If you look at the history of that poll, asking Americans about the most important problem facing the country looks a lot like asking fish about the most important problem facing the sea: you’re always going to get a lot of water-related responses. Filter out the responses explicitly related to the economy, and the probably-related “dissatisfaction with government,” and you get guns, education, immigration, health care, and ethical/moral/family decline in a statistical tie for first place with everything else on the list. From this, Gallup concludes that “Guns Remains Low Priority for Americans.”

However, the Pew Research Center For The People And The Press actually does measure how much people care about various issues in the news, and their most recent survey indicates that Americans care more about the gun debate than any other issue, and have for most of this year. In the January 3-6 survey, 34% of Americans said they were following news on the gun debate very closely, a close second to the fiscal cliff’s 38%. Since then, the gun debate has dominated the survey every time it’s been included: 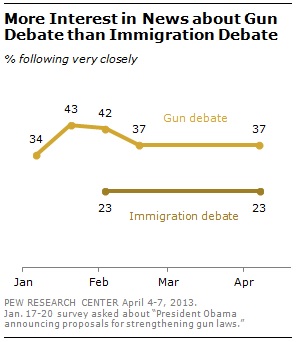 One thing you can conclude from this report, however, is that Americans certainly do care about guns, and care about them a lot. The real test will be how this issues fares now that the first round of post-Newtown legislative action has been sabotaged, and whether committed activists like Gabby Giffords can keep it alive in the minds of Americans long enough to make a difference in 2014.