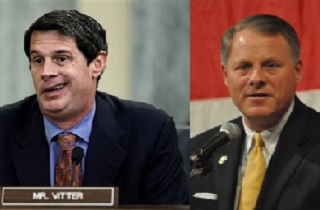 As evidence continues to mount that the U.S. Senate’s sabotage of the Toomey/Manchin background check bill could come back to haunt those who engineered it, you can add Senators David Vitter (R-LA, NRA rating=A) and Richard Burr (R-NC, NRA rating=A) to the woodpile of 8 “no” votes whose electoral prospects are being torched by that vote. A new Public Policy Polling survey shows that not only are Vitter and Burr in deep doo-doo over their “no” votes, but voters in Louisiana and North Carolina are likely to reward Senators Mary Landrieu (D-LA, NRA rating=C) and Kay Hagan (D-NC, NRA rating=F) for their “yea” votes.

In Louisiana 72% of voters say they favor background checks to only 20% who are opposed. There is strong bipartisan backing with Democrats (81/13), independents (73/20), and Republicans (61/29) all expressing at least 2:1 support. 45% of voters in the state say they’re now more likely to support Landrieu for reelection because she voted for background checks, compared to only 25% who say they’re now less likely to vote for her. Landrieu has also seen a 6 point improvement in her net approval rating from the last time we polled the state in February, from +2 then at 47/45 to now +8 at 49/41.

It’s a similar story in North Carolina. There 73% of voters support background checks with only 22% opposed. Again there is a strong consensus across party lines with more than 60% of Democrats (86/11), independents (67/28), and Republicans (61/34) all supporting them. 52% of voters say they’re more inclined to reelect Hagan next year because she voted for background checks, while only 26% of voters say they will be less likely to support her because of it.

Hagan and Landrieu are both faring a lot better on this issue than their Republican colleagues in these states. 50% of North Carolinians say they’re less likely to vote for Richard Burr in the future because of his opposition to background checks, compared to only 26% who consider his vote to be a positive. And in Louisiana 41% of voters say they’re less likely to vote for David Vitter in the future based on his vote on this bill, compared to just 25% more likely to.

As usual, the devil is in the crosstabs, but the breakdown isn’t any better than in other polls for the “no” votes. Vitter helped himself slightly with Republicans, with 36% more likely to vote for him based on the vote, versus 26% less likely, but among independents, 40% are less likely, while only 16% are more likely, to vote for Vitter based on his vote. Burr’s “no” vote saw him gain with 43% of Republicans, while losing 28%, but a full 51% of independents said they’d be less likely to vote for Burr, versus 26% more likely, based on his vote.

The Democratic-leading polling firm has now polled this question in eight states, and found uniformly disturbing results for those senators who voted to continue allowing terrorists and murderers to buy guns. Contrary to media spin about waning enthusiasm around gun reform, it appears that people care a great deal about this issue, and are prepared to show it at the ballot box.