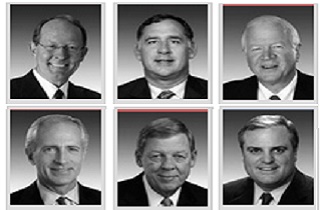 Even as the cable news networks have largely moved on from the topic, the issue of background checks on all firearm sales continues to figure heavily in the minds of voters. In the weeks following the defeat of the Toomey/Manchin background check bill (even though 54 Senators voted for it, versus 46 against), Democratic-leaning polling firm Public Policy Polling released several surveys indicating that voters are prepared to punish those “no” votes, and reward “yes” votes. Their latest 3-state poll shows that six more Senators could lose support over their “no” votes, bringing the total to 14.

PPP’s poll of red states Arkansas, Georgia, and Tennessee showed overwhelming majority support for background checks, although at slightly lower levels than the 90% or so who favor them nationally. In Arkansas, 60% of voters support background checks, with 81% Georgia, and 73% in Tennessee. Voters in those states, like in the others, were more likely to punish “no” votes than reward them:

Mark Pryor‘s chances for reelection next year would be enhanced if he supported a background check bill when it comes back up in the Senate. 40% of voters say they would be more likely to cast their ballots for him next year if he reconsidered his position on this issue to just 34% who say they would be less likely to.

Some of those margins are slimmer than in other polls, but even among Republicans, a “no” vote was only helpful to three of the Senators polled, while that “no” vote hurt every one of them with independent voters, with the exception of John Boozman (R-AR).

None of these Senators are particularly vulnerable, but the polling does indicate that the issue of background checks, the baseline for common sense gun regulation, continues to resonate with voters, even in deep red states, and even with Republicans in those states.

There was also a weird discrepancy among Democrats, in the other direction. While 83% of the Democrats polled supported background checks, 88% said that a reintroduced bill should be passed, meaning that 5% of Democrats don’t support background checks, but want the law to pass anyway.

Pew’s poll also found 66% support for a federal database to track all gun sales, and 54% support for an assault weapons ban, while 63% opposed plans to arm school teachers and administrators. However, they also found a significant gap in activism between gun regulation proponents and opponents, with gun rights activists far more engaged across a range of metrics.

That’s not to say, though, that activism equals victory. If you yell louder, but your message is deeply unpopular, that volume isn’t going to help you. What will help, though, is if the news media continue to ignore the issue, as they have for the past several weeks. Although there has thankfully been no large-scale massacre lately, the media all but ignored the Mother’s Day shooting in New Orleans that resulted in 19 non-fatal wounds, and the rash of children shooting children, both of which merited a lot more coverage than they got. It remains to be seen how the public’s opinion would change if they knew that, while children are shooting themselves and others at a disturbing rate, the National Rifle Association tells parents not to lock up their guns.