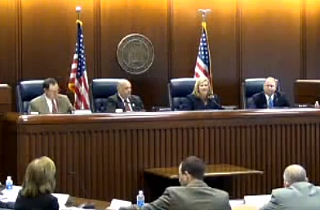 The Alabama Public Service Commission apparently begins all of its meetings with a prayer session, but a recent one from last week took on what some consider an unusually political message, lamenting the “sinful” ways of those who allow gay marriage, abortion, and the “removal” of God from public schools.

APSC commissioner Twinkle Cavanaugh introduced her friend, John Delwin Jordan, a member of her local baptist church and an active Prattville Tea Party leader. Jordan began his prayer session imploring the meeting attendees to hold their hand up if they “believe in the power of prayer.”

Prayer at government meetings has long been the subject of constitutional debate. Some organizations like the Freedom from Religion Foundation argue that government prayer sessions are “coercive” in nature and violate the principle of separating Church from State by endorsing a particular faith; Christian activists maintain it is within their freedom of religious expression to hold prayer sessions during government meetings.

The United States Supreme Court has recently agreed to hear a New York case on prayer at government meetings during its next term beginning in October. A final ruling is expected in June 2014.

Watch below, as flagged by RightWingWatch: