Pres. Obama Addresses African American Blogs: An Audience “That May Not Be Watching Meet The Press“ 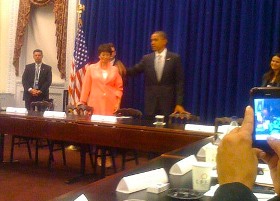 Pres. Barack Obama and Valerie Jarrett met with a group of 20 bloggers and journalists at the White House for the first ever African American Online Summit earlier this week.

The group spent time talking with each other about politics and more, but also with Jarrett. And Pres. Obama himself made a surprise appearance – addressing the new, African American-focused, media.

Concrete Loop, which had several representatives at the event, has some details of the event:

The roundtable of about 20 bloggers/journalists (from various online outlets) discussed an array of topics from health care, economics to education and more. They even discussed the role online media plays on current society.

When Pres. Obama came in to address the group, he discussed the importance of new media:

The media is changing so rapidly that websites, like you guys do every day, do two things. Number one, it allows us to reach audiences that may not be watching Meet The Press…I’m just saying, it might be a different demographic. But the second thing is obviously part of what is so powerful about the web, is that it’s not just a one-way conversation.

The focus on taking new media seriously seems to be new with this administration, which could be the person in office or just a sign of the media times. Either way, it’s interesting to see the President stress the importance of those who get their news outside the Meet The Press mainstream.

Here are some more details about who attended the event. And below, a TwitVid, via @TheYBF, of Pres. Obama’s appearance at the event: