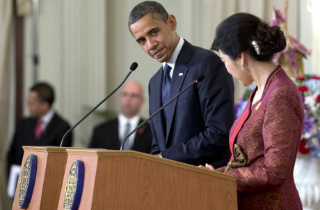 Sunday morning in Thailand, President Barack Obama exchanged the usual pleasantries and gave the usual declarations to the press one would expect when a president begins a three-day tour of Southeast Asia. When asked about the ongoing (and growing) Israeli-Palestinian conflict, the president gave a full-throated defense of Israel’s decision to launch military strikes on Gaza in return for Palestinian rocket attacks.

But Reason‘s Mike Riggs noticed something particularly hilarious/sad about the president’s remarks: Obama accidentally satirized himself and American foreign policy with a few unwittingly ironic lines (emphasis mine):

Let’s understand what the precipitating event here that’s causing the current crisis and that was an ever-escalating number of missiles that were landing not just in Israeli territory but in areas that are populated, and there’s no country on Earth that would tolerate missiles raining down on its citizens from outside its borders.

…So we are fully supportive of Israel’s right to defend itself from missiles landing on people’s homes and workplaces and potentially killing civilians.

…Israel has every right to expect that it does not have missiles fired into its territory.

Got that? No country on Earth would tolerate missiles raining down from outside lands. As Riggs wrote in his headline: “…says the man who regularly bombs Pakistan and Yemen.”

Of course, many people will cry “false equivalency!” or justify the double standard by noting that our bombings of Pakistan and Yemen are for targeted killing of militants effectively at war with the United States. If that’s how you see it, then fair enough. But one could easily say that Yemen would not tolerate missiles raining down on its civilians… like one particular 16-year-old boy… from outside lands.

But Obama’s comment is mock-worthy solely for the fact that the crux of his contribution to the “War on Terror” has been to… rain down missiles on civilians in Pakistan and Yemen from outside lands. This has also largely been the crux of American neoconservative foreign policy: outside bombings for me, but not for thee.

And if the leaders of those two countries actually stood up and threatened us with war because of our killing of their civilians, could they point to these remarks when we tell them to back off?

Watch the president’s remarks below, via NBC News: