President Obama On Republican Debt Ceiling Hostage Threat: ‘I Will Not Play That Game’
video

President Obama On Republican Debt Ceiling Hostage Threat: ‘I Will Not Play That Game’ 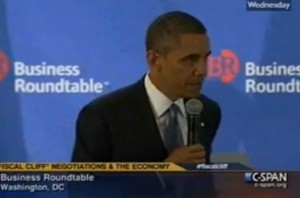 Republican House Speaker John Boehner wasted little time in reviving the debt ceiling hostage threat that led to the current fiscal cliff debacle, telling reporters last week that he intended to extract political concessions from President Obama in exchange for not crashing the world economy. Over a year ago, I asked Jay Carney how the President would deal with this threat in his second term, and while Carney didn’t really have an answer, as it turns out, I did. “Throughout this process, you and everybody sane pretty much has agreed that the threat of a default was a catastrophic one,” I told Carney, “So I’m wondering why the response from the outset wasn’t, well, we can talk about what you want after you put the pin the back in the grenade.  And what are the chances that that’s how the President will respond when this comes up in his second term?”

At a business roundtable in Washington on Wednesday, President Obama answered, telling the assembled business leaders that this “is not a game that I will play,” and that “We are not going to play that game next year,” and that “I will not play that game.”

Transcript: (via The White House)

Let me make one last point and then I’ll start taking questions. There had been reports — and these are not necessarily confirmed, and maybe some of you have more insight than I do on this — that perhaps the Republicans go ahead and let the middle-class tax cuts get extended, the upper-income tax cuts go up, otherwise we don’t get a deal, and next year we come back and the thinking is Republicans will have more leverage because there will be another vote on the debt ceiling and we will try to extract more concessions with a stronger hand on the debt ceiling.

Most of you were involved in discussions and watched the catastrophe that happened in August of 2011. Everybody here is concerned about uncertainty; there’s no uncertainty like the prospect that the United States of America, the largest economy that holds the world’s reserve currency potentially defaults on its debts; that we give up the basic notion that the United States stands behind its obligations.

And we can’t afford to go there again. And this isn’t just my opinion; it’s the opinion of most of the folks in this room. So when I hear some on the other side suggesting that to resolve the possibility of a perpetual or a quarterly debt ceiling crisis that there is a price to pay — well, the price is paid by the American people and your businesses and the economic environment worldwide. And we should not accept going through that.

John Engler, who is, I think — he and I philosophically don’t agree on much — (laughter) — no, I’m just being honest about John, and he’s a great politician but he — he originally comes from the other party– but John is exactly right when he says the only thing that the debt ceiling is good for as a weapon is just to destroy your credit rating.

So I want to send a very clear message to people here: We are not going to play that game next year. If Congress in any way suggests that they’re going to tie negotiations to debt ceiling votes and take us to the brink of default once again as part of a budget negotiation — which, by the way, we had never done in our history until we did it last year — I will not play that game. Because we’ve got to break that habit before it starts.

The President didn’t explain exactly what he would do if Speaker Boehner insists on threatening the U.S. credit rating again, but he was crystal clear that he will prevent that from happening. Short clips from this speech are getting play on cable news, but it’ worth noting that he said it three times. There has been renewed talk that President Obama might invoke the “Constitutional Option,” whereby he unilaterally raises the debt ceiling under an interpretation of Section 4 of the 14th Amendment, which states that “The validity of the public debt of the United States, authorized by law, including debts incurred for payment of pensions and bounties for services in suppressing insurrection or rebellion, shall not be questioned.”

It’s an option that President Obama didn’t rule out during the last doomsday threat, but ultimately failed to exercise, saying at one point “I have talked to my lawyers. They do not — they are not persuaded that that is a winning argument.”

Of course, time changes everything, and a second-term president can more easily afford a debate on executive overreach versus a catastrophic default, much more easily than Republicans can afford to further damage our nation’s credit rating. That’s why neither is likely to happen, because Boehner’s leverage is against the full faith and credit of the U.S.. government, not the President. If President Obama holds firm on this, Republicans will have no choice but to relent.