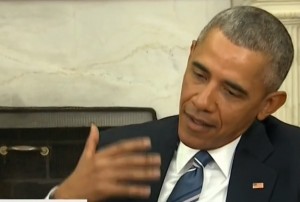 The battle to replace deceased Supreme Court Justice Antonin Scalia has heated up this week after Republicans on the Senate Judiciary committee met and decided they would not consider any nominee put forth by President Obama, and sent a letter to Senate Majority Leader Mitch McConnell (R-KY) formally announcing that.

On Wednesday morning, President Obama published an essay at SCOTUSBlog detailing his thoughts on nominating a justice, and later, during a pool spray in the Oval Office with King Abdullah II of Jordan, the President took the unusual step of responding to a reporter’s question in that setting. He spoke for just over nine minutes, and did his best to knock down the dizzying array of arguments being used to justify this obstruction, even correcting Republicans on their erroneous use of the term “lame duck”:

None of the founding fathers thought that — when it comes to the president carrying out his duties, he should do it for three years and then on the last year stop doing it. There’s an argument that, well, the president shouldn’t do this because he is a lame duck. Well, the truth of the matter is that traditionally, the term “lame duck” refers to the two or three months after an election has taken place, in which a new president is about to be sworn in. I’ve got a year to go. I don’t think they would approve of me abdicating my duties as commander-in-chief, and stop doing all the other work that I’ve got to do. Well, this is part of my job.

Outwardly, the President’s plan seems to be to try and build public pressure around a specific nominee, and shame Republicans into confirming him or her. That scenario seems unlikely at this juncture, because the political damage from the base for confirming an Obama nominee would be unfathomable for most Republican senators. However, there is considerable political risk in pursuing their present course as well. If Hillary Clinton wins the presidency, they could wind up with a much less palatable nominee, and with an electoral map that favors Democrats retaking the Senate, pressing partisan advantage now could result in serious blowback when the Democrats take over.

One scenario that hasn’t been discussed much, because it’s also nearly impossible, would be a recess appointment. The problem is that the Senate can easily keep itself out of recess through pro forma actions, so even if President Obama were inclined to make a recess appointment, it would take a monumental screw-up by Senate Republicans to allow it. A Solomonic solution to the dilemma would be for the Republicans to deliberately make such a “screw-up,” allowing them to save face with constituents, while also taking the possible negative consequences off of the table for them.