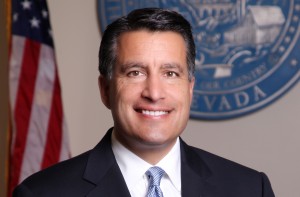 According to The Washington Post, President Barack Obama is currently vetting Republican Nevada Governor Brian Sandoval to fill the open seat on the Supreme Court.

Democratic Senate Minority Leader Harry Reid reportedly met with Sandoval Monday to discuss the potential nomination. “A person familiar with the conversation said that while Sandoval told Reid he had not made a final decision on whether he would accept a Supreme Court nomination, he would allow the vetting process to move forward. Another person in Nevada familiar with the process confirmed that the process is underway.”

The move would be a big gambit for Obama. Sandoval, a former federal district judge and attorney general, is pro-choice and has said he believes gay marriage is a settled issue, but is conservative on issues such as gun rights and labor unions. A Sandoval confirmation could prevent the next Republican president from nominating a more conservative candidate, but could prevent a Democratic president from selecting a staunch liberal.

If appointed, Sandoval would be the first governor to join the Supreme Court since then-California Governor Earl Warren in 1952.

UPDATE (4:10 PM ET): Sandoval said in a statement that he had never been contacted or spoke to the Obama administration about being a Supreme Court nominee. Of course, WaPo said that he had been contacted by Harry Reid about the post, making it something of a non-denial denial.

Sandoval spox: "Neither Governor Sandoval nor his staff have been contacted by or talked to the Obama Administration…" on SCOTUS vacancy.