Obama To Stephanopoulos: I Was Born In Hawaii And I Don’t ‘Have Horns’ 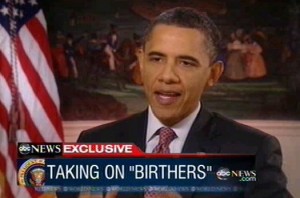 George Stephanopoulos scored a major scoop tonight by getting Barack Obama to offer his own insight on the birther controversy recently brought back into the news cycle by the presidential/promotional campaign of reality television host Donald Trump. Stephanopoulos described Obama’s reaction to being questioned about his birthplace: “He grabbed at the chance with a big smile – saying he thinks the whole issue will be a problem for Republicans.”

Stephanopoulos describes his interview with Obama on ABCNews.com:

“I think that over the last two and a half years there’s been an effort to go at me in a way that is politically expedient in the short-term for Republicans. But [it] creates, I think a problem for them when they want to actually run in a general election where most people feel pretty confident the President was born where he says he was, in Hawaii. He– he doesn’t have horns…we’re not really worrying about conspiracy theories or– or birth certificates,” President Obama told me.

And in all my talks with Obama I think it was the first time he was one the same page as Karl Rove who thinks the “birther” controversy is hurting the GOP.

“The truth of the matter is that I think that the vast majority of Americans across the country – Democratic or Republican – really want this election to be about growing the economy, getting control of the deficit, preparing the future for our kids. And my suspicion is that anybody who is not addressing those questions…Is going to be in trouble. I think they may get a quick pop in the news. They may get a lot of attention. But ultimately, the American people understand this is a serious, sober time,” he told me.

And as the interview wound down the president got ready to his hometown this afternoon for the first fundraising rallies of his last campaign.

Watch the video, courtesy of ABC News below: