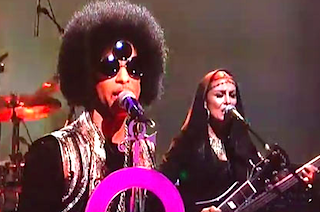 Last week, Prince announced that he had recorded an untitled song that “addresses the unrest in Baltimore and the socio/political issues around the country in the wake of a slew of killings of young black men.” Now, it looks like the artist will perform the song live for the first time at a “Rally 4 Peace” concert in Baltimore this coming Sunday, May 10.

The show, which may also feature yet-to-be-announced special guests, will begin at 8 p.m. at Baltimore’s Royal Farms Arena, with tickets going on sale today, Wednesday, May 6 at 5 p.m. ET via Ticketmaster. Prince has asked concert-goers to wear the color grey in honor of Freddie Gray.

“In a spirit of healing, the event is meant to be a catalyst for pause and reflection following the outpouring of violence that has gripped Baltimore and areas throughout the U.S.,” concert promoter Live Nation said in a statement. “As a symbolic message of our shared humanity and love for one another, attendees are invited to wear something gray in tribute to all those recently lost in the violence.”

Below are the official lyrics for Prince’s “Baltimore,” which the artist said he plans to stream on Jay Z’s new Tidal music service, via MyFoxTwinCities.com:

DOES ANYBODY HEAR US PRAY?
4 MICHAEL BROWN OR FREDDIE GRAY PEACE IS MORE THAN THE ABSENCE OF WAR
ABSENCE OF WAR

R WE GONNA C ANOTHER BLOODY DAY?
WE’RE TIRED OF CRYIN’ & PEOPLE DYIN’
LET’S TAKE ALL THE GUNS AWAY