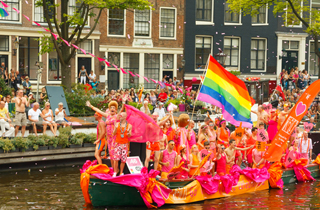 Dear gays and lesbians of the world: y’all better start getting your legal funding Kickstarters and GoFundMes ready, because a Nebraska woman has just slapped all of you with a massive lawsuit accusing you of homosexuality. You’re going to need so many millions of dollars to fight this one off.

Sylvia Ann Driskell, the “ambassador” representing “God and His Son, Jesus Christ,” filed the broad-ranging lawsuit in a Nebraska district court, asking them, according to NBC News, to “decide once and for all whether homosexuality is or isn’t a sin.”

And according to her lawsuit — written completely by hand, since she seemingly does not prefer the devil’s QWERTY keyboard — Driskell doesn’t think U.S. law is necessary to imprison homosexuals:

The suit doesn’t cite any case law under which a judge could make such a determination. In fact, it cites no court cases at all, quoting Webster’s Dictionary and numerous Bible verses, instead, to bolster Driskell’s central contention, which is:

“That homosexuality is a sin and that they the homosexuals know it is a sin to live a life of homosexuality. Why else would they have been hiding in the closet.”

Driskell writes, “I’m sixty six years old, an [sic] I never thought that I would see the day in which our Great Nation or Our Great State of Nebraska would become so compliant to the complicity of some peoples [sic] lewd behavior.”

In response, the homosexuals, who’ve spent the past few years gaying up America without fear of legal retribution, are reportedly quaking in their gay boots:

The suit was noticed by several gay activists and writers, including Dan Savage, the advice columnist, who said, “Man, I hope I get deposed!” and Steven Payne, a self-described “gay feller,” who wrote in The Daily Kos:

“Brian (his husband) and I will be liquidating our assets in preparation for a certain loss. We anticipate the restitution ordered to this woman will take us down to our very last penny. In the meantime, our fear is so great we have ceased and desisted being homosexual.”

Mr. God nor his son could be reached for comment, and their representative, Mr. Holy Ghost, did not return our request for comment via prayer or Twitter DM.