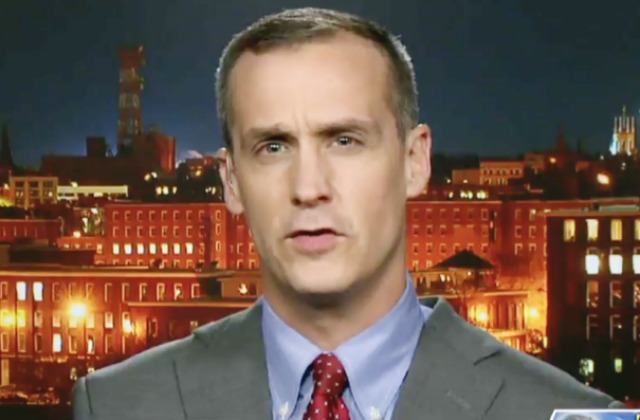 You may recognize Joy Villa as the pro-Trump singer who made headlines earlier this year for wearing a Trump dress to the Grammys. Now Villa is coming forward with an allegation of unwanted touching against Corey Lewandowski.

Politico is reporting tonight on Villa coming forward to claim Lewandowski was inappropriate with her when they were both at a party last month celebrating the Trump presidency at the Trump International Hotel in Washington:

“I’m wearing this silver suit and stretchy pants, and after the photo, he smacks my ass really hard,” Villa said. “It was completely demeaning and shocking.”

In the moment, Villa said, she confronted him. “I said, ‘Watch it.’ Half-joking, I said, ‘I can report you for sexual harassment.’”

Lewandowski’s response, she said, was almost as shocking as the original slap.

“He said, ‘Go ahead, I work in the private sector,’” Villa recalled. “Then he smacks my ass again.”

Villa said she initially did not want to come forward, explaining, “I thought, ‘What if this messes up my chances.’ He has power and influence, and he’s close with the president, who just tweeted about his book. I wanted to play it safe and avoid the drama.”

Per the report, however, “she said the avalanche of women coming forward to tell their stories about experiencing sexual harassment from powerful men in media, entertainment, politics and other industries motivated her to agree to talk to POLITICO.”

Michelle Fields, the reporter you may remember from Lewandowski’s most infamous moment of the 2016 campaign, tweeted this reaction to tonight’s report:

I’m sure she’s just delusional & he didn’t touch her. Probably doesn’t even know her. https://t.co/YGXK3XJKgB