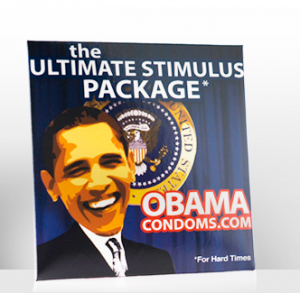 If you happen to be a New Yorker, you may be (intimately?) familiar with the various persons peddling Obama-themed condoms throughout the city. One such vendor, José Andujar, was arrested last Friday in Times Square – his third arrest for peddling.

The New York Post‘s article on the arrest states that Andujar was arrested despite a “State Supreme Court justice ruling that his rubbers are protected by the Constitution’s guarantee of free speech” and that the condoms should be treated “like books, which do not require a vending license.”

We weren’t able to find any information about such a ruling, although we did find reports from last summer indicating that a court had actually ruled that peddling this type of patriotic prophylactics was actually unconstitutional. From Gothamist, back in August of 2010:

The rubbers have to hit the road. Two unlicensed street vendors fighting for the right to sell political-themed condoms under the guise of free speech have had their lawsuit rubbed out by a Manhattan Criminal Court judge.Thomas Larsen and Edward Wardle, employees of the novelty-condom company Practice Safe Policy, were given tickets on Canal Street and in Times Square for pushing prophylactics like The Palin, which comes in a wrapper with the slogan “When Abortion is Not an Option.” Their Obama condom’s described as “Ultimate Stimulus Package.” On Friday judge Michael Gerstein ruled that no matter how hilarious their products, their business was not protected by the First Amendment.

Law.com reports that despite the condom-makers’ purported desire “to stimulate political awareness and conversation” through novelty contraceptives, Judge Gerstein ruled that the defendants were engaged in commercial speech.

The vendors were selling condoms with names like “The Palin,” which features a picture of Sarah Palin and the message “When Abortion is Not an Option.” Condoms with an image of President Obama on the wrapper are labeled the “Ultimate Stimulus Package.”

(Anyone know anything about the ruling actually comparing the condoms to books?)

Maybe just make sure not to purchase your condoms off strangers on the street? Or, you can always just buy the condoms online if you prefer your lovemaking to be kind of problematic. From the site’s FAQ:

What size are they?
Obama Condoms are one size fits most; however smaller sizes (for Asians and Caucasians) are available upon request.

What makes Obama Condoms so special?
Obama Condoms are black to make her feel like the first lady (even if she’s really second or third).