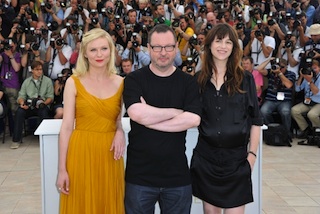 It shouldn’t be that hard to get publicity for the new movie Melancholia. It has a great cast with stars like Kirsten Dunst, Charlotte Gainsbourg, Kiefer Sutherland, and Alexander Skarsgard. It’s about the end of the world which is a very popular subject these days. And Dunst even purportedly has three nude scenes! That thing should market itself. However, director Lars Von Trier isn’t one to rest on his laurels so he told the press at Cannes today that he was a Nazi.

Here’s what he said, transcription and description from Vulture:

“The only thing I can tell you is that I thought I was a Jew for a long time and was very happy being a Jew, then later on came [Danish and Jewish director] Susanne Bier, and suddenly I wasn’t so happy about being a Jew. That was a joke. Sorry. But it turned out that I was not a Jew. If I’d been a Jew, then I would be a second-wave Jew, a kind of a new-wave Jew, but anyway, I really wanted to be a Jew and then I found out that I was really a Nazi, because my family is German. And that also gave me some pleasure. So, I, what can I say? I understand Hitler. I think he did some wrong things but I can see him sitting in his bunker. [Kirsten Dunst goes, “Oh God!” and hides uncomfortably behind Lars.] I’m saying that I think I understand the man. He is not what we could call a good guy, but yeah, I understand much about him and I sympathize with him … But come on! I’m not for the Second World War. And I’m not against Jews. No, not even Susanne Bier. I am very much for them. As much as Israelis are a pain in the ass. How do I get out of this sentence? Okay, I am a Nazi. As for the art, I’m for Speer. Albert Speer I liked. He was also one of God’s best children. He has a talent that … Okay, enough”

Of course, none of this should be taken seriously. Von Trier is a provocateur (the guy’s got the word “fuck” tattooed on his knuckles) and despite the fact that the new film is supposedly a meditation on his own struggles with depression, he’s known for these crazy press conferences. Perhaps he was just trying to outdo himself after his last visit to the film festival in which critics reacted angrily to his the graphic violence (a whole bunch of genital mutilation) in his film Antichrist and he responded by telling them that he was the “best director in the world.” (The movie went on to win Gainsbourg that year’s best actress award)

So, does Von Trier actually consider himself a Nazi? About as much as he actually considers himself the world’s best directer, ie. probably not. So why would he say that? Well, out of the non-cinephiles amongst you, how many had heard about Melancholia before this morning. Yeah, that’s what I thought.

Check out the movie’s Nazi-free trailer below: