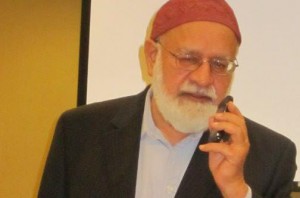 A professor at Lincoln University, a historically-black public university in southern Pennsylvania, has been accused of posting virulently anti-Semitic, homophobia, sexist, anti-Israel, and anti-American sentiments on his Facebook page.

The Daily Beast’s Ben Collins and Katie Savadski posted a long investigate report on tenured professor Kaukab Siddique‘s Facebook page. Siddique, whose salary is paid with taxpayer dollars, has previously come under fire in 2010 for his blatant Holocaust denial.

The most recent of Siddique’s more colorful posts was his take on the allegations against Bill Cosby, namely that “many women are sluts” and American women are slaves to men:

The info about Cosby is not very surprising. Most non-Muslims behave like he did… What I can’t understand is why it took so long for the violated women to come out against him. Was it:

2. Many women are sluts.

4. Random sex is quite acceptable in America.

5. They don’t have families like Muslims do who would take revenge for rape.

Then there was his take on the attempted murder of Pamela Geller: “If Zionist Pamela Geller has her way, the racists might try to enter mosques. Muslims should prepare themselves. Don’t be scared of these dirty Jewish Zionist White Supremacist thugs.”

As for the child molestation allegations against Josh Duggar? “The homo lobby is taking revenge for the Duggars’ criticism of transgender and homo activity. The fact is that now in this country the homo lobby controls so much of the media that they attack Christians. No religion is sacred in America.”

A brief perusing of Siddique’s Facebook indicates that he also harbors a deep hatred of Fox News’ “Magyn [sic]” Kelly, the Islamic advocacy group CAIR, and Democratic presidential candidate Martin O’Malley (who is a “hard core Zionist, though not a Jew, and reckless supporter of homosexuality”).

Siddique’s latest Facebook post takes aim at the Daily Beast. “My dear Muslim friends… the Jewish Press has been trying to vilify Dr. Siddique for years and get him fired for his truth telling and activism against oppression. I ask you to reply to this post and give him your support as they wish to silence all Muslim scholars.”