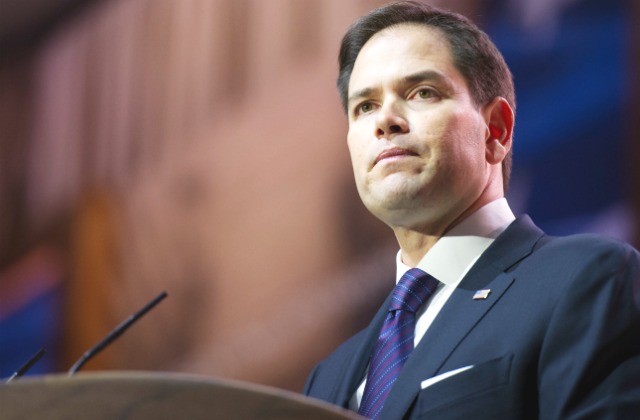 "Peace I leave with you;my peace I give you.Not as the world gives do I give to you.Do not let your hearts be troubled or afraid."John 14:27

"Commit to the Lord whatever you do & your plans will succeed.The Lord works out everything for his own ends….."

Leah McElrath of Shareblue, a left-wing website owned by David Brock, played up the Florida Republican’s Tweets and added her own speculation about them:

@marcorubio My understanding – and the input from those in my mentions – is these are the Bible verses to which one turns in one’s darkest hour.

@marcorubio We have no way of knowing if Rubio is seeking comfort and courage, trying to provide it to others, or trying to justify his own actions.

@marcorubio Nonetheless, Rubio publicly tweeting these verses today – after everything that has been happening – feels significant.

@AlwaysLGM @marcorubio That’s the hopeful view: that he’s praying for courage to do what’s necessary.

Jennifer Rubin of The Washington Post replied to McElrath with even wilder speculation about Senator Rubio. Politico’s Marc Caputo chimed in and pointed out the politician’s religious background, but Rubin retorted with further scorn for Rubio:

@JRubinBlogger @leahmcelrath @marcorubio Not hacked. He was tweeting quotidian stuff after. Rubio is a two-churchgoer. So not a big surprise. But still…

@MarcACaputo @leahmcelrath @marcorubio Totally tone deaf. Like the high school prom king got swapped with the real senator from an important state

Charles C. W. Cooke of National Review added further detail to Caputo’s point about the senator’s churchgoing by pointing out that the first Tweet was a direct quote of the daily Mass reading from the Catholic Church.

Marco Rubio is tweeting out Bible verses this morning. This is oddly terrifying. https://t.co/tBZLk1on4E

The freak-outs led to mocking posts from conservatives on Twitter.

hahahaha these are literally from today’s Mass readings but sure this is super unsettling https://t.co/0OGfCAGOM3 https://t.co/fH2tlhv9jC

Yeah, how could he not realize that Twitter is reserved for snark, vitriol, and sloganeering? https://t.co/LXgw4448Ms

This is what we call making shit up. You have NO IDEA what his motive is. https://t.co/edVmpawvdz