Rachel Maddow: Adding To ‘Coverage’ Of Mosque Story “Grosses Me Out”

Rachel Maddow: Adding To ‘Coverage’ Of Mosque Story “Grosses Me Out” 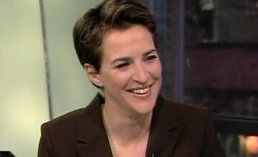 This is not something you’ll likely hear a lot of people in the media say. Rachel Maddow says she held off covering the Lower Manhattan mosque story because she thought that by doing so she would merely be “playing right into the hands of the people who ginned this up.” Three guesses who those people might be.

Here’s her full explanation as told to the Daily Beast’s Lloyd Grove:

“I’d rather not cover it,” she tells me, never mind that President Obama has entered the fray. “It’s just one of those fake, non-controversial things that has been ginned up into a controversy for a political purpose. Participating in the discussion of this, as a political matter, is playing right into the hands of the people who ginned this up.” (By “the people who ginned this up,” she means Fox News and its allies—about which more in a moment.) “Adding to the volume—in both senses of the word—of the coverage, um, grosses me out a little bit,” she says.

She eventually jumped in Monday night after conceding that the story has risen to such national prominence that to not weigh in “is to spit into the wind.” However, she further excoriated Newt Gingrich:

“He’s got this idea that the so-called war on terrorism is actually some sort of religious crusade. That’s a whole trope on the right—that Muslims are secretly at war with us, only we’re not at war with them because we’re in denial that they’re winning. This ‘Sharia law is going to take over America’ stuff—Gingrich totally spouts all that crap.”

Later she reveals that if it weren’t for Don’t Ask, Don’t Tell she would have seriously considered joining the military: “I can’t say I definitely would’ve signed up, but it’s one of the things I would have thought about doing with my life. Because for me, not to be trite, it’s a way to serve the country.”

Full interview here…including Maddow’s ‘noted’ coming out when she was 17.