Rachel Maddow In Afghanistan: What Are We Asking Our Troops To Do Here? 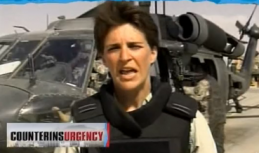 Rachel Maddow began her week-long stint in Afghanistan last night with the “the little cable TV show” goal of answering two questions: Does this make sense? And what’s it like here?

When our elected officials send people into combat we take on a lifelong sacred national responsibility to pay them back for their service as veterans. Lifelong. If we’re going to fight two of the longest wars in American history, if we’re going to fight those wars simultaneously, and we’re going to have such a tiny proportion of our population serving in the military…than we owe to them to try and understand what they’re lives are like at war.

Well put. Maddow began her trip at Kandahar airfield where NBC’s Richard Engel revealed that there was a TGI Fridays in Kandahar (with three items on the menu and no liquor) “you could be in TGI Fridays one day, and then take a five minute chopper ride and be in the dust with soldiers who are being killed every week. It is a very stark contrast.”

Maddow also drove in a mine-resistant vehicle with Brig. Gen. Hodges up through Kandahar City to explore exactly how the President’s “uplift” there is working: “they are not blowing things up, they’re doing things like building police stations.” Hodges explains that unlike Marjah (which has not been successful) the U.S. is trying to work with and build on the existing security structures in Kandahar and that the hope is the presence of American soldiers to bolster the Afghan police forces will help defeat the perception of the sort of corruption that is rampant in the country. As you might imagine this is far more dangerous and complicated than it sounds. Watch the segment below (it’s worth your time). Maddow’s talk with Gen. Hodges while traveling the mine-resistant vehicle is the sort of thing that translates better on screen than print.