Rally For Sanity: They Also Want Their Country Back 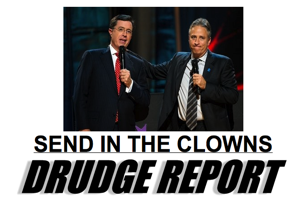 Today is the Jon Stewart/Stephen Colbert “Rally For Sanity And/Or Fear” in Washington, D.C., on the Mall. It’s the place where Martin Luther King Jr. held his historic March on Washington on August 28, 1963, and where Glenn Beck, along with Sarah Palin, held their own “Restoring Honor” rally on that same day this past August, 46 years later. Now, in a sort of response, thousands and thousands and thousands of people have converged and are converging on Washington for this rally, hoping to restore something else: Sanity, yes, but also integrity, respect for facts, rationality and, yes, progress.

So let’s get one thing straight: Anyone who thinks this rally is about ironic detachment does not get it.

Who am I to make such pronouncements? Well first of all, I’m a Canadian who can’t vote, so far be it from me to speak for what Americans want. But, I am also a close observer of politics and media in this country, and the intersection of both – and how both intersect, and overlap with, each other.

An important detour now, stay with me. Right now I’m sitting on a bus with a group from the Upright Citizen’s Brigade, the hub of New York’s comedy scene and the clubhouse where people like Lorne Michaels, Tina Fey, Jon Stewart and Stephen Colbert find their talent. On the wall in the UCB there’s a framed NYT article about the late Del Close, the brilliant improv teacher who taught and inspired the UCB’s founders – Amy Poehler, Matt Besser, Matt Walsh and Ian Roberts – and for whom the UCB’s annual improv marathon is named. Close co-wrote with Charna Halperin a slim volume that is widely considered to be the improv bible. It’s called “Truth In Comedy.”

Truth in comedy. Probably the most important single ingredient – because behind every joke is the shared understanding of why it’s funny. The comedian can put the punchline out there, but it’s the audience that receives it – and has to get it. The best jokes resonate because they uncover ridiculousness in our daily lives, reveal the silliness – and sometimes sadness – of things we see every day.

This is what Jon Stewart and Stephen Colbert, along with their writers and contributors, do every day. Yes, there are goofy dick jokes – a comedy staple, and that’s a truth, too – but we all know by now that the shows succeed because they have the sharpest news and political commentary on the air, never mind exposing hypocrisy, buffoonery, obfuscation and corruption across the highest echelons of power. There’s a reason Jon Stewart keeps being called “The Most Trusted Man In America.” There’s a reason Stephen Colbert’s White House Correspondents Dinner address now stands as legendary among truth-to-power takedowns. Oh, look, there’s that word again. Truth.

I remember watching Colbert’s WHCD address in April 2006, spreading like wildfire back before YouTube went wide via painfully slow but worth-it download, wide-eyed and gasp-laughing at his shockingly blunt barbs at President Bush. It still makes me a little wide-eyed reading it, frankly – it was packed with uncomfortable truths about an administration that had been rife with hypocrisy, buffoonery, obfuscation and corruption, and they rang uncomfortably true in that ballroom of media and political insiders.

By the way, those insiders initially panned Colbert’s performance, sitting in stony silence as Colbert persevered in what’s commonly known as “bombing.” So when various commenters have wrung their hands about today’s rally, fretting that Stewart and Colbert have overreached beyond their station, I’ve rolled my eyes. They haven’t overreached themselves, they’ve reached their audience.

They’ve reached their audience, and grabbed them through their TVs and computers and maybe even a few newspapers, and spurred them to action. Thousands upon thousands of people amassing on a mall is not an act of collective indifference. It tapped into something – just as Beck’s and Palin’s rally did in August. 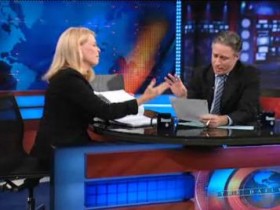 Back to that rally. We can debate whether (and how) Beck whipped up his viewers and the Fox News base with ominous programs about President Obama’s scary appointees (Van Jones) or scary socialist agenda (Obamacare!). We can debate whether Sarah Palin’s rhetoric that plays fast and loose with facts – when she’s not steamrolling right over them (cough “Death Panels”) – fed into the Tea Party anger and some of its nastier undertows (cough “reload”). We can debate why Fox continues to give people like Betsy McCaughey a platform (see here and here) and how the kind of disinformation she disseminates is bad for the national discourse – and I’m sure that in the comments section I’ll hear from all sorts of you on that.

But what is not debatable is who we look to, more and more, to take on the rhetoric, half-truths, fearmongering and inchoate anger that includes people angry about the government meddling in their medicare and clamoring to “take their country back.” When Betsy McCaughey came back, spewing once again her disinformation and fearmongering untruths, it was Jon Stewart who took her down, politely but ruthlessly.

It’s what Stewart and Colbert do every show – examine and expose. And, as it turns out, galvanize – because Beck and Fox’s viewers aren’t the only ones who shout at the TV screen. Turns out Stewart and Colbert, in their shared quest to unmask truthiness, have galvanized a whole lot of people who want their politicians and the constitutionally-guaranteed free press that’s supposed to police them to be just as obsessed with…the truth.

That’s where sanity comes in. Because you don’t have to be a fire-breathing, pitchfork-wielding extremist to feel passionate about what’s going on in your country. You actually can be passionate about things like making rational decisions based on a thorough airing of the facts, a reasonable and informed debate, a respect for the Constitution that includes, um, knowing about it. A Rally in favor of such things may not be extreme – but the passion and conviction behind it sure is.

So don’t confuse this Rally and its attendees with ironic detachment, or Stewart and Colbert with people who don’t know the difference – or care about it. They do, and so does everyone who bussed, trained, flew or otherwise trekked to show up. They want their country back, too – and they are prepared to demonstrate to do so, sanely and reasonably.

Our bus has arrived. Let the comedy – and the truth within it – commence.

This post was written and hand-coded on a Blackberry, so please excuse the lack of links. It’s filled with facts, though. Follow Rachel for more of them from the Rally For Sanity And/Or Fear at www.twitter.com/rachelsklar.