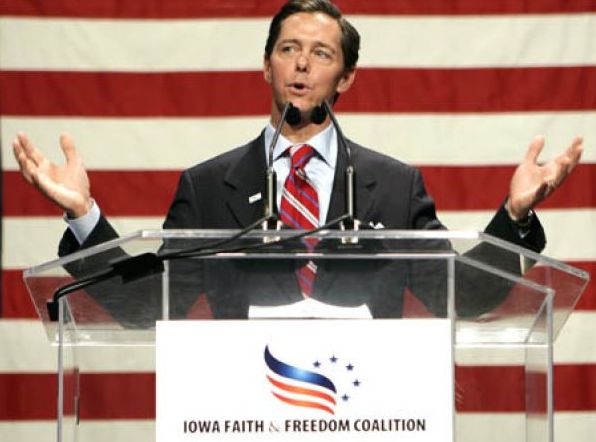 During a speech at the national Faith and Freedom Conference yesterday, conservative activist Ralph Reed gave an unusual history lesson to his compatriots fighting against same-sex marriage: according to him, it’s very similar to the fight against slavery. (Yes, that slavery.)

Yahoo! News reports that during a breakout session, Reed, the founder of the Faith and Freedom Coalition, made an explicit connection between what he described as the “judicial overreach” of state courts ruling in favor of gay marriage, and the 1857 Supreme Court case Dred Scott v. Sandford, which ruled that African-Americans had no rights and were not free citizens.

Despite same-sex marriage activists scoring civil rights victories through judicial rulings, Reed argued that it didn’t mean that gay marriage has widespread support among Americans. “Only six of them, six out of those 17, six out of 50 states, had done it by referendum or by state legislature,” he said. “In every other case, it was imposed by courts. Just like the courts had to impose Dred Scott. Because they couldn’t do it on the country because the country didn’t agree with it. The country, by the way, doesn’t agree with same-sex marriage.” (Polls indicate otherwise.)

And that, he argued, is exactly like the struggle abolitionists faced when they realized the courts weren’t on their side:

“The battle looked like it was lost, but it really wasn’t,” Reed said of the immediate aftermath of the Dred Scott decision, which went on to embolden abolitionist activists. “And that’s kind of like where we are right now. Anybody heard lately that we’re losing the marriage issue? Anybody heard that argument? You notice some similarities? I’m not comparing slavery to same-sex marriage, OK? I’m just pointing out that when you have these fights, what’s interesting is that if you look at same-sex marriage, it’s now legal in 17 states.”

(Reed said he was not counting the states that have changed since last year’s Supreme Court case that struck down the Defense of Marriage Act.)

It is unknown whether Reed mentioned how abolition was actually achieved — namely, by three Constitutional amendments made in the aftermath of a bloody Civil War that tore the country apart — nor if he drew parallels between the fight against same-sex marriage and actual war.