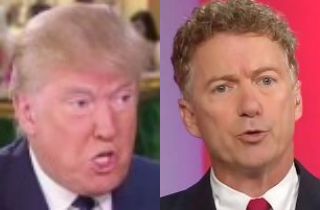 Donald Trump made a big show today of announcing that he will be signing a loyalty pledge to the Republican party, something Rand Paul was all too happy to claim credit for.

The question of Trump’s willingness to stand by the GOP and support the nominee while ruling out a third party run had been lingering in the air for a while, but it got plenty of attention when, at the start of the Fox News debate, Bret Baier asked every candidate if they would agree to such a pledge.

Trump said he wouldn’t yet, and got quite a lot of boos. Right away, Paul jumped in and said, “This is what’s wrong. He buys and sells politicians of all stripes. He’s already hedging his bet on the Clintons!”

In our first debate, @realDonaldTrump raised his hand in front of 25 million people to not run third party. I called him out for it.

I spent the last few weeks making sure people knew it was not acceptable to potentially throw the next election to Hillary.

I am glad to see @realDonaldTrump capitulated and changed course after our debate.

During his presser, Trump took a shot at Paul and said that if Carly Fiorina‘s allowed in the CNN debate, someone else should be kicked out to keep it an even 10. He specially mentioned Paul.

You can watch that clip here, via CNN:

And you can watch Paul calling out Trump at the Fox debate here: