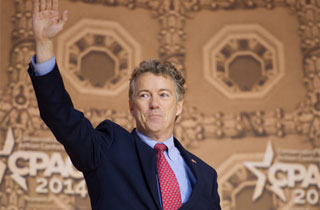 “There’s thousands of them that can be undone,” said Paul at a Louisville, Ky. luncheon with the city’s Chamber of Commerce, according to WFPL. “And I would use executive orders to undo executives orders that have encroached on our jurisprudence, our ability to defend ourselves, the right to a trial, all of those I would undo through executive order.”

Minutes later, with a group of reporters, Paul appeared to walk his statement back juuuuust a little:

While a common talking point regarding the Obama administration is that he abuses the executive order privilege — a.k.a. the shiny toy that lets presidents circumvent Congress in making policy — Barack Obama has only signed 183 executive orders, which is low compared to his predecessors: George W. Bush signed 291, Bill Clinton signed 364, and Ronald Reagan signed 381. The all-time winner: FDR, with 3,522 executive orders.

(Then again, Lincoln, who was commonly accused of over-extending the president’s powers, only signed 48 executive orders, so, yeah.)